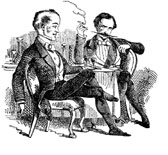 The Dilemma of Catholic Corporate Executives

IN A SYSTEM THAT PUNISHES VIRTUE & JUSTICE

When the Church’s social encyclicals are discussed, the emphasis is usually placed on the question of whether papal directives on the economy should be considered conservative or liberal, in the terms of the 20th-century dialectic. This is a question of consequence, one worthy of ongoing analysis.

What I offer for your consideration just now, however, is a different perspective, one with a narrower focus. I propose to explore the papal directives aimed at those with the responsibility for setting corporate policy. To be specific: I seek to discover how much difference it would make if a Catholic corporate executive were genuinely attentive to the ethos of the social encyclicals. Would he behave any differently from anyone else at a meeting of the National Association of Manufacturers or the Chamber of Commerce? And could he?

The popes have spoken clearly: they reject the notion that corporate decisions detrimental to the work force and to society as a whole can be defended with the now familiar line, “It’s just business.” No room is provided in the social encyclicals for a concept of the separation of Church and boardroom, for application of “the bottom line” as justification for corporate inattention to the common good.

To get to the point, let us consider the culture clash that would confront an imaginary Catholic executive at a meeting of corporate directors seeking to implement the recommendations from a team of efficiency experts calling for a “restructuring” of the work force, specifically, “excessing” senior, highly paid workers. The proposal is to let these workers go, unless they agree to work for salaries comparable to those that new “temps” could be paid to do the same work. And, if this plan cannot be implemented, the backup under discussion is a scheme to relocate manufacturing operations to Mexico to take advantage of the lower labor costs available there now that NAFTA has been implemented.