Volume > Issue > The Christian & the Epicurean 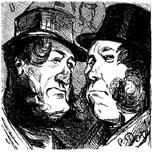 The Christian & the Epicurean

Those who hope to negotiate civil compromises to our society’s major moral disagreements search in vain for middle ground or common ground on which we can all gather. In the middle, there often seems to be no ground at all, but thin air, an abyss. Because our moral disagreements break out into political battles, and because politics is the art of compromise, political truces of various sorts are worked out from time to time. But these constructions are wobbly at best, for across the moral gap politics can throw only a rope-bridge that is likely to give way when real weight is placed on it. The moral divide is wide and deep, and across it two cosmologies — two incompatible visions of the universe, of nature and human nature — confront each other. One is the Epicurean, the other is the Christian, and between them the differences go all the way down.

Hopeful consensus-builders may not see that the two are distinct and antagonistic. Even some Christians and Epicureans may not be clear about it. For during the centuries-long contention between the two cosmologies, a large group on the Christian side has incorporated Epicureanism into itself and has mutated — though still calling itself Christian — into its own enemy. Such must occur of necessity: Since Grace builds on Nature, a Christian who adopts a view of Nature completely at odds with Christian Revelation thereby blinds himself to some of that Revelation. This impaired Christianity is, to be blunt, Liberal Christianity. With one eye looking toward Epicurus and one eye looking toward Jesus, it stumbles about, unable to see where it is going or where it has come from.

Epicurus (341-271 B.C.) was first and foremost a moral philosopher, not a natural philosopher. His goal was the achievement of tranquillity; the means to this goal was materialism. “Do not believe there is any other goal to be achieved by the knowledge of meteorological phenomena,” Epicurus admonishes his readers, “than freedom from disturbance.” Epicureanism is, then, a way of life seeking a universe to support it. Epicurus employs the atomistic materialism of Democritus, not because he has empirical evidence that it is true but because it fits his ethical goal of freedom from disturbance. If we were already tranquil, he says, “we would have no need of natural science.” We may begin to grasp this relationship of ethics to physics by examining Epicurus’s famous four-part cure.

Homosexual Memoirs for Catholic Freshmen: Why?

At a Christian university, students and faculty should be committed to a search for the truth about the truly good life for man.

Where Have All the Students Gone?... Liturgical Winners & Losers