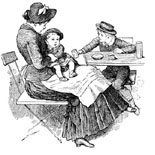 When I flew west from Boston recently, my thoughts were in the small Massachusetts village of Gill. My flight east had brought me to a group of interested parents and board members of a small school scheduled to open its doors for the first time in September 1995.

Gill was only one of many similar trips made throughout the country. Always for the same reason: People want to give their children more. The more is, in this case, a small private school that teaches the Catholic faith and is academically sound.

Our own small private Catholic school, Kolbe Academy, alive for these past 15 years, has become somewhat of a model for these nascent learning centers.

What prompts these educational endeavors? To help the child know the vocation God has in mind for him, and to help him to be fully Catholic.

Good guidelines affirm home-schooling as a legitimate response by parents to their role as primary educators, while also affirming that home-schoolers should be part of the local Church.

When I flew west from Boston recently, my thoughts were in the small Massachusetts village…