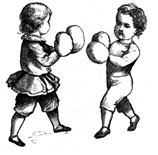 ROWING ACROSS THE ATLANTIC

A man I know put his son in a public school that offered a Spanish immersion program from kindergarten through sixth grade. The boy had an additional year of Hispanic culture in the seventh grade. When the boy entered eighth grade, his father was informed that his son was being enrolled in Spanish 1. After seven years of immersion, he was not able to read, write, or speak Spanish at a level that would not require his enrollment in a Spanish course designed for students who had never before encountered the language. Perhaps we should not be surprised. A recent study by the Department of Education found that over two-thirds of American fourth-graders cannot read proficiently in English. Why should we expect a school system that cannot teach kids to read in their first language to teach them a second language?

I know a woman with a daughter in a public school. The girl brought home a friend who made a casual remark that the woman’s daughter was being teased at school. When the woman found out what was happening, she was appalled. Her daughter was tall for her age and overweight. Some boys thought she was a good target for ridicule. Each day as the girl walked from the bus to the school the boys lined up and called out, “Here comes the big slut.” Except they were not just saying “slut,” but also using a more offensive term, a crude reference to female genitalia. The girl was in the fifth grade. She never said a word to her mother, who would not have known but for the chance comment from the girl’s friend. The boys were eventually suspended for two weeks.

On a lighter note, I had a friend who drove around in fear of bumper stickers because his public-school daughter terrorized family and friends over environmental and animal-rights issues — causes that were impressed upon her at school. A sticker that said “Save the Dolphins — Don’t Eat Tuna” set off a crusade to eliminate tuna-eating. Next was pork, then milk. This girl’s school also sent kids home to record their parents’ use of alcohol, tobacco, and coffee under a drug-awareness program.

When I think of these things, I am a little embarrassed by the evasive answers my wife and I give when people outside the home-schooling community ask why we teach our children at home. We say our son is a daydreamer who would be lost in large classrooms, or our daughter is behind in language skills and needs concentrated attention. We say it is not for everyone, but it is best for us, when we should grab these people and say, “Don’t you know the schools are no longer teaching? Get your kids out!” School shootings are the tiniest tip of the iceberg. Some kind of corrupt philosophy has gotten loose and is laying waste to everything traditional education stands for, destroying the very concept of childhood lived out under the moral and academic authority of adults, and exposing children to the crudest forms of psychological cruelty. “Get your kids out before they are permanently injured.”

My family lowered our small boat into the water and are rowing away from an American educational establishment that feels like the Titanic.

Good guidelines affirm home-schooling as a legitimate response by parents to their role as primary educators, while also affirming that home-schoolers should be part of the local Church.

"But What About Socialization?"

Many believe the problem with homeschooling is the socialization of children. One couple, however, believes they have the answer.