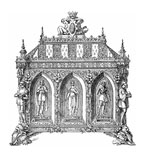 PLAYERS IN THE DRAMA OF SALVATION HISTORY

By Bob Filoramo | November 2019
Bob Filoramo is retired after 52 years of teaching and administration in public and private high schools, as well as at the college level. He is the father of 11 children and co-author, with Bob and Ginny Gallic, of Raising Children for Heaven (1989).

Throughout the course of salvation history, a number of unwitting “actors” have inadvertently facilitated the advancing of the Lord’s plans. Such is the case near the end of the Acts of the Apostles as an intense drama unfolds, and several key players emerge on the scene and help open another chapter in St. Paul’s missionary adventures and the spread of the Gospel of Jesus Christ.

The story begins in Acts 21. Paul has returned to Jerusalem, where some hostile Asian Jews have stirred up a crowd, shouting, “This is the man who preaches to everyone, everywhere against our people, against our Law, and against this place” (i.e., the Temple). The fury against Paul spins out of control. People come running from all sides; they lay hold of Paul and drag him out of the Temple, “and the gates were closed behind them.” They are poised to kill him when a report reaches the tribune of the Roman cohort about rioting all over Jerusalem.

As the Jews are beating Paul and ranting about having him executed, the Roman tribune, Claudius Lysias, quickly orders his soldiers to charge on the crowd and seize Paul. The tribune arrests Paul, presuming he is the cause of the riot, and questions him as the crowd surrounds the soldiers and calls out their versions of answers to the tribune’s questions. The noise of the crowd is so overwhelming that the tribune orders Paul to be taken into the Romans’ fortress. Claudius Lysias, of course, has no idea that he is playing a significant part in furthering Paul’s mission to Rome.

By this time in his life, Paul has become a seasoned, veteran apostle, having suffered imprisonments, beatings, ridicule, alienation, and any number of privations, so he is more than man enough to handle this onslaught. Having been literally carried off by the Roman soldiers out of reach of the Jewish mob, Paul asks if he may have permission to speak to the people. For Paul, this is a golden opportunity to preach about Jesus and his own conversion. Few men would have had the courage to stand up to a wild, hostile crowd intent on killing them. But Paul’s radical love for Christ, and his urgency to spread the Gospel at all costs, impels him to detail his Damascus Road experience, as well as his fidelity to the Mosaic Law. Initially, the Jews listen, but when Paul says Jesus was “sending you out to the pagans far away,” they begin to call once more for Paul’s death, “yelling, waving their cloaks, and throwing dust into the air.”

It's Good For Business

"Gay consumers are wealthier than average, and loyal to brands that they perceive as gay-friendly," according to Reuters.

Do You Despair Over the Current Crisis in the Church?

Newman was asked by an inquirer why the Catholic Church should be in many respects so unlike what we should expect and wish her to be.

Evil's baneful effects may be likened to the invisible, odorless, and deadly radiation emitted by uranium. One must 'put on the armor of God' to resist it.