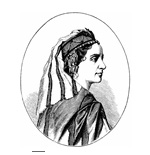 By William C. Zehringer | December 2009
William C. Zehringer, a retired college writing instructor and a freelance author with a doctorate in old and middle English language and literature, is a member of the Society of Catholic Social Scientists.

One of our Blessed Mother’s most perfect imitations in the Middle Ages was the gifted, many-sided mystic, St. Birgitta of Sweden (c. 1303-1373). A brilliant scholar, a splendid writer, and a happily married wife and mother, she influenced, in the course of her long career, both the society in which she lived and the spiritual life of her own and subsequent generations.

Birgitta is unique among those women of the Middle Ages who were saints and mystics: she was a bride of Christ with a husband and children to whom she was deeply devoted. And she is outstanding in another respect as well: the ability she possessed to act successfully in several different spheres  domestic, courtly, religious, administrative, and political  and to leave a lasting impact on each one of them. As a result, her writings, which illume the way to a redeemed world, are a most engaging mirror of the social life of the fourteenth century.

Perhaps it is the diversity of those occupations and experiences, coupled with her developing sense of the Divine Presence as she journeyed through life, that makes The Revelations of St. Birgitta of Sweden such a powerful testimony to the love of God moving in the world and individual souls. In her “questioning responses” to Christ and His Mother, and in her portrayals of their hidden lives, this great visionary embodies in her writings a foretaste of the heavenly city, ever proclaimed in Christian theology as the true spiritual quest and final goal of mankind.

Born into a proud and noble family, of “a lineage of holy kings,” as Christ Himself told her, Birgitta was to know a joyful married life as a dutiful and generous wife and mother, who bore eight children, and a loyal companion to her husband, whose passing saddened her greatly. The great benedictions of her interior life began while she was still a married woman. For “she was already that Bridget,” wrote Johannes Jorgensen, “who was later to be driven by the spirit to confess three times a day  Saint Bridget, whose tender conscience had continually to be relieved and healed by the soothing unguent of grace.”

What Will World War III Be About?

There are many ways to cut this world’s cake in half and take sides. A Christian should presumably think in terms of the Church vs. the world.