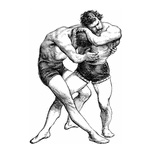 By Terence J. Hughes | July-August 2009
Terence J. Hughes is a professor at the University of Maine. He and his wife have taken two dozen sexually abused women into their home, all but four of whom were pregnant. He has been imprisoned in six states for peaceful sit-ins at America's "abortion Auschwitzes."

In the Apocalypse of St. John we read, “Now a great sign appeared in heaven: a woman, adorned with the sun, standing on the moon, and with the twelve stars on her head for a crown. She was pregnant, and in labor, crying aloud in the pangs of childbirth. Then a second sign appeared in the sky, a huge red dragon…. Its tail dragged a third of the stars from the sky and dropped them to the earth, and the dragon stopped in front of the woman as she was having the child, so that he could devour it as soon as it was born…a male child…the son who was to rule all the nations with an iron scepter…. And now war broke out in heaven, when Michael with his angels attacked the dragon…. The great dragon, the primeval serpent, known as the devil or Satan, who had deceived all the world, was hurled down to the earth and his angels were hurled down with him” (Rev. 12:1-10).

What are we to make of this vision, and how is it connected to the celebration of the Gospel of Life revealed by Jesus Christ and the struggle against the Culture of Death that stalks the earth in our own day?

The answer may be found in Volume One of The Mystical City of God, the Divine History and Life of the Virgin Mother of God, manifested to Mary of Agreda, proclaimed a Venerable Servant of God by the Church. She received this private revelation from Jesus Christ while she served as abbess of the discalced Franciscan nuns in the Convent of the Immaculate Conception in Agreda, Spain, from 1625 until her death in 1665. Ordered by her superiors, she wrote down this history twice, from 1637 to 1645 and from 1655 to 1665, both times reluctantly, believing she was unworthy. By the order of five popes — Innocent XI, Alexander VIII, Clement IX, Benedict XIII, and Benedict XIV — it was repeatedly subjected to the closest scrutiny and declared authentic, worthy of devout perusal and free from error. It has been published in over sixty editions in ten languages.

Chapter VII of Book One (in Volume One) is an account of the creation of “Heaven for angels and men and Earth as a place of pilgrimage for mortals.” Hell, with material fire but originally uninhabited, was located in the center of the earth.

Poe uses the doppelgänger motif as a physical manifestation of Wilson’s conscience and ultimately shows the demise of a man who, blinded by his sins, kills his own conscience.