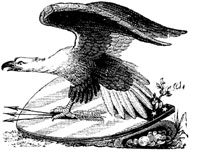 By Paul R. Muessig | July/August 2006
Paul R. Muessig lives in Fredericksburg, Virginia, with his wife of 22 years and four of his seven adopted children. The views he expresses herein are not necessarily those of the Department of Defense.

The war in Iraq has created a forum tailor-made for the NOR and other soi-disant guardians of Catholic orthodoxy to prance about in high moral dudgeon about Just War doctrine, the immorality of the war, and the pernicious benightedness of those who support it. The apoplectic zeal with which the NOR seeks to expose and neutralize neoconservative miscreants, and the editorial disdain with which it treats them, would be more justifiable if the Church’s own position on the moral licitness of support for the war in Iraq were clear and unambiguous. As I will demonstrate, however, there is a fundamental discontinuity between the Church’s opposition to the war in Iraq and her position with regard to individual support for it, or participation in it. More specifically, despite her well-known opposition to the war, the Church has failed to impose moral sanctions against those who directly or indirectly support it. The incongruity between her words and her actions substantially undercuts the Church’s moral position on Iraq, and reduces the NOR’s editorial position from championing Catholic truth to advocating an editorial opinion. It also has implications that go far beyond the war in Iraq, and touch on the moral licitness of Catholic support for American “defense” in general.

To understand more clearly what is at issue here, it is important to understand the salient features of the NOR’s position against the war in Iraq. For those who may have missed the editorial donnybrook that has graced the pages of the NOR over the past couple of years, the case against the war runs something like this. First and foremost, the war in Iraq is now, and always has been, unjust. At no time prior to the war did any of the justifications offered by the Bush Administration for the invasion of Iraq come close to flirting with even the barest minimum of criteria necessary for a just war. Events subsequent to the invasion (e.g., no weapons of mass destruction, the Administration’s shift of emphasis to a “war of liberation and freedom,” the conclusions of the 9/11 Commission concerning the lack of connection between Iraq and 9/11 or between Iraq and al Qaeda, etc.) prove beyond any reasonable doubt how disingenuously and cynically the Bush Administration manipulated intelligence data and public opinion prior to the war to justify military action. Moreover, this action was clearly intended only to benefit Israel, ensure American dominance in the energy-rich Middle East, and facilitate America’s pursuit of social, political, cultural, and especially economic global hegemony.

Second, there are only three types of people who could have failed to see through the painfully transparent smokescreen that the Bush Administration served up as justification for the war in Iraq. First among these are the neoconservative cabalists who have infiltrated and hijacked the highest levels of American government. These nefarious actors are foisting their Zionist vision of an uncritically pro-Israel American Empire on a complacent and largely ignorant American public. Next in line for vilification and derision come neoconservative fellow-travelers or unwitting dupes. These are the reflexive political partisans and nationalists of the “my country right or wrong” variety who put allegiance to their political party or country above their allegiance to the Gospel. And finally there are the hoi polloi, the great unwashed masses of American ignorati, who know little and care less about the nuances of Christian moral thought — or any other kind of thought for that matter. These are the folks who live for the here and now, who take their political cues from the lyrics of country and western songs, and who actually believe Fox News is “fair and balanced.” In short, the only people who support the war in Iraq are the deceitful, the proud, and the stupid.

Third, with regard to Catholics who claim to be orthodox but who support the war in Iraq, there’s not an honest one in the bunch. They are no better than the cafeteria Catholics who support abortion, picking and choosing by which of the hard moral teachings of the Church they will abide. Given the choice between serving God or mammon, they have chosen the latter.

NOR locuta est, causa finita est (“The NOR has spoken, the case is closed”).

The Church in North America is enriched by the example of the Church in Central America as it struggles for justice and human digni­ty.

If we need heroes to honor, let them earn that designation by virtue of true sacrifice based on personal moral commitment.