Volume > Issue > Running to Do Evil 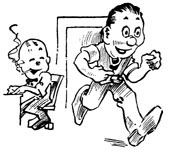 The Conservative Jewish prayerbook for the Day of Atonement includes a communal confession listing various sins. Among the expected sins an unusual one stands out: “Running to do evil.” This may be based on Proverbs 6:18, but what is this interesting sin? I believe it means embracing evil enthusiastically instead of being drawn into it reluctantly. For example, suppose there is an attractive woman at my workplace. After months of struggling against temptation, I finally give in. I am married, so this is adultery. But suppose I pursue her daily for months until she finally yields. This is adultery and running to do evil.

There are other examples. When I was a medical resident four decades ago, one of my colleagues had a pregnant patient with severe heart disease. Neither she nor the baby could survive if the pregnancy continued, and the pregnancy was not far enough along for the baby to be delivered. The perceived choice was: one survivor or none? As was required, two senior consultants agreed that abortion was necessary. The day it was scheduled, the atmosphere on the ward was somber. I paid close attention to so rare an event. Other patients died despite the doctors’ best efforts; this baby was to die because of them. Even though the mother and baby were not my patients, I felt a sense of failure, because my colleagues were deliberately ending a human life, whereas our fundamental purpose was to save life. Perhaps my sense of failure was due to the prohibition of abortion in the Hippocratic Oath, which young doctors took in those days. Perhaps it was a more basic aversion to taking innocent life. The source of this aversion may have been the Jewish religion I had been taught as a child, or it may have been the respect for human life I had absorbed from parents and teachers, or a combination of these. In any case, I had been taught to be receptive to the inner voice telling me that all human life is precious.

Perceiving that they were forced by circumstances to choose the lesser of two evils, the doctors acted reluctantly and sadly (after all, whatever is deemed a lesser evil is by definition still evib~ This perception, and the bad feelings that accompanied it, provided a brake on their behavior. They would be reluctant to do something similar in the future, and unlikely to extend the activity further. Whether or not one agrees with the “lesser of two evils” approach in cases such as this or thinks that the lesser evil was truly chosen in this case — in other words, whether or not one concurs with what the doctors did — everyone can agree, and this is my point, that the doctors had not run to do it.

Now things are different. Judges, feminists, and “ethicists” tell us that abortion is not the lesser of evils but a positive good; not an admission of failure but an expression of freedom. Such an attitude evokes no bad feelings. It acts not as a brake but as an accelerator. If we are doing something good, why not do more of it? Why not extend it further? Most young doctors no longer take the Hippocratic Oath. I believe the cause of the oath’s demise is its prohibition of abortion. But the oath also prohibits assisted suicide and euthanasia: “I will give no deadly medicine to anyone if asked, nor suggest any such counsel.”

Sin and crime, no matter how legalized, how euphemized, how tolerated, will always in the end reveal their association with loathsomeness and horror.