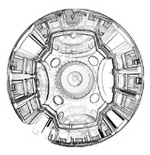 By James V. Schall | September 2010
Fr. James V. Schall, S.J., is a professor in the Government Department at Georgetown University. He is the author of numerous books, including The Life of the Mind, Roman Catholic Political Philosophy, The Mind That Is Catholic, and, most recently, The Modern Age (St. Augustine's Press).

The Catholic Church has never considered politics to be salvific. Active interest in politics came relatively late in Christian history. Indeed, for the first centuries of her existence, the Church’s main preoccupation was surviving in a hostile political setting. Participation in politics is also a late interest. Popular sovereignty and voting are, in the order of importance, almost of yesterday afternoon.

Christianity first appeared in the Roman Empire, which was an all-inclusive social and political system, though it periodically persecuted Christians, often thinking they were atheists. As in Acts 4, when John and Peter told the authorities that they would continue to preach even if forbidden, early Christians had to take some stance on how they would deal with a political order that had its own diverse gods, laws, and ways of life. It is not strange that early Christian writers saw something providential in pagan Rome, a polity within which the Savior was born — after all, Caesar Augustus’s decree that the whole world should be enrolled was the occasion of Mary and Joseph’s presence in Bethlehem, where Christ was born. With its ideals of common brotherhood, language, and laws, Rome was technically open to everyone; it had a universalism that Christianity would later build on — the popes, like the Roman emperors before them, speak Urbi et Orbi, to the “city and the world.”

“Christians are indistinguishable from other men either by nationality, language or customs,” the famous second-century Epistle to Diognetus tells us. “They do not inhabit separate cities of their own, or speak a strange dialect, or follow some outlandish way of life…. And yet there is something extraordinary about their lives. They live in their own countries as though they were only passing through. They play their full role as citizens, but labor under all the disabilities of aliens. Any country can be their homeland, but for them their homeland, wherever it may be, is a foreign country.”

Early Christians did not find much of interest in Roman politics. They hoped mainly to be left alone to lead quiet lives in whatever city they found themselves. While the Romans were the most worldly and political of peoples, the Christian homeland was not here.

The Return of Socrates

One’s heart can be too hardened to participate in dialogue; today’s Hero­dian slaughter of the innocents involves something more than intellectual blindness.

This statement was attacked by business leaders and the prime minister, and was the subject of a full-scale debate in the Canadian Parliament.

O Death, Where Is Thy…Tickle?

Everything in the old Requiem Mass forced us to consider death and God’s judgment, Christ’s mercy and our complacency.