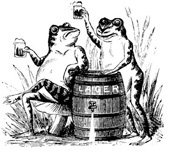 By Lydia McGrew | April 2002
Lydia McGrew, who has a Ph.D. in English from Vanderbilt University, is a home-schooling mother of two in Kalamazoo, Michigan.

Some years back, I used to share a ride to a high-Anglican Mass with a boisterous young undergraduate. He was not usually interested in serious conversation, but once, during Holy Week, we were discussing the Maundy Thursday vigil. Both he and the driver of the car had signed up to take an hour, and both of them solemnly insisted that Satanists sometimes enter churches during vigils to steal the Sacrament for a Black Mass. Hence, the vigil was one of guardianship as well as of adoration. “I mean,” said the undergraduate, struggling for words, “He’s so helpless up there on the altar….”

The phrase and its context have stuck with me ever since, for they illustrate a larger principle. Reality often confronts us incognito, and when it does, it is at its most vulnerable. The Son tells both the sheep and the goats at Judgment Day that they met Him and did not recognize Him. The Incarnation provides the best example of all. God in the flesh does not look like God, and He very often does not exercise divine power, even in His own defense.

In Fiddler on the Roof, Yente says, “If God lived on earth, people would break His windows.” But according to the New Testament, that’s already happened. Joseph took the Christ Child and His mother and fled to Egypt to escape Herod. The Infant performed no miracles; He appeared to be, not God, but a baby like any other, and hence as vulnerable as any baby. And finally, when as a man He was nailed to the cross, when they mocked Him and said, “Come down from the cross if thou be the Son of God,” He did not do so. “Father, forgive them, for they know not what they do.” They encountered reality incognito, and failed to see Him for what He really was.

The Epistle to the Hebrews says that faith is the “evidence of things not seen.” Science itself asks us to believe in things we cannot see. Electrons, for example, can be detected by their effects, but not seen in themselves, even under a microscope. All day and every day we are believing in — and acting upon our belief in — forces and actions and entities which we have not seen, some of which we could not see if we wanted to. To believe in them requires an act of faith — not against reason but against the crude empiricism that demands direct sensory knowledge. As C.S. Lewis said, faith is opposed not to reason but to instinct: A man may know quite well that anesthetics will not kill him but nonetheless feel terrified when the mask approaches his face.

Now it is pro-abortion Catholic politicians who are teaching the bishops the meaning of the Eucharist, something as absurd as it is unprecedented.