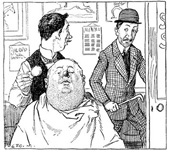 The Outline of Sanity: A Life of G.K. Chesterton

Arthur Livingston, recently Director of the Writing Center at the University of Illinois, Chicago campus, is currently testing his vocation with the Cowley Fathers in Cambridge, Massachusetts.

Any book that puts G.K. Chesterton on cen­ter stage for the contemporary reading public de­serves applause, whether or not it contains any in­trinsic merit. Chesterton has been willfully and spitefully neglected by those whose arbitrary tastes dictate what will or will not be the received stan­dard of literary excellence. An orthodox Christian like Graham Greene or Evelyn Waugh can join the club (and then only its fringes) so long as the faith does not intrude into the reader’s consciousness too strongly. On the other hand, a talented author with severe pathological dislocations such as D.H. Lawrence will receive publicity far in excess of his merit until his ranking in the first order becomes axiomatic. It was, I believe, Dr. Goebbels who said that if a lie is repeated often enough without argu­ment, it will eventually be believed. Similarly, in the rather dirty dealings of literary criticism, the foibles and aesthetic aberrations of the reigning elite lead not only to the elevation of some to a po­sition far beyond their proper place, but, far worse, to the planned ignoring of true artistic giants like Chesterton. Alzina Stone Dale has written the first in what one hopes will be a spate of books re-eval­uating G.K.C. and elevating him to his deserved place in English letters.

Dale has parlayed two features of biographical writing that make the book commendable: her re­search is painstaking and accurate, and she never writes with the scholarly drabness that typically ru­ins undertakings of this kind. That a number of people already familiar with Chesterton’s life, in­cluding this writer, will disagree violently with nearly every conclusion she draws is beside the point, at least in this, the overall evaluation of her book. Even though her interpretation of Chester­ton often seems wrong, her manner of presentation invariably seems right. Some of her observations of other people are priceless, such as describing H.G. Wells as having the manners of the lower class and the morals of the upper. I can easily imagine Ches­terton laughing heartily at this image, and a hun­dred more of her offerings.

He would also be happy with an attempt to portray him as something more than a jolly giant. No other book on Chesterton has done a better job of placing him in his historical context. The elec­tion of 1910 signaled a crisis in British social thought, at least to men of Chesterton’s party, that caused them almost overnight to reject the parlia­mentary system as it had become. Hilaire Belloc’s The Servile State, Cecil Chesterton and Belloc’s The Party System, and G.K.C.’s What’s Wrong With the World all date from 1910-1912 and represent the earliest coherent statements of what came to be called “distributism,” of which more anon. Dale has shown better than all her predecessors why the crisis took place in their thinking at that time, dis­entangling the various machinations of the Liberal Party in order to allow for a serious understanding of the radical disaffection of Chesterton and his as­sociates.

Also, she places the anti-Semitic issue in its correct context. The reviewer of The Outline of Sanity for the Chicago Sun-Times barely touched on the book, but spent a disproportionate time rid­ing the same tiresome charge against Chesterton — that he was a Jew-baiter with particularly sinister overtones. Dale may well be the first writer to point out that not a single derogatory word that could by the slightest stretch of the imagination be interpreted as anti-Semitic issues from G.K.C.’s pen until after the Issacs family had brought Cecil Chesterton to the dock for slander. Not one word G.K. ever wrote exceeded the bounds of what was common British opinion of the time, no animosity (except for Geoffrey Issacs) is ever evident in any statements about Jews, and, most tellingly, Ches­terton’s primary concern seems to have been for their safety as a people. Dale is to be commended for her fairness in treating this issue.

She cannot be so cited in her treatment of Chesterton’s brother, Cecil, who is depicted in such black terms as to be unbelievable. Her references constitute little more than a hatchet job.

Less damning, but still a telling problem, is her insistence on G.K.C. as a Liberal. He was a Lib­eral, if we mean someone who habitually voted for the Liberal Party. Unfortunately, the term has too many connotations from too many periods to be of much use to anybody but a student of Edward­ian politics. A passing acquaintance with Chester­ton would tell anyone that he was not either what the early 19th century meant by a liberal — be­cause he despised capitalism, at least whenever it manifested itself in laissez-faire ideology. Of course, it would be barbarism to suggest that the modern meaning of “liberal” describes Chesterton. Gladstonian liberalism? Not really. Chesterton was too rigorous a thinker to permit himself to submit to middle-class complacency. He several times re­iterated that he was a Liberal and that the Liberal Party had changed. But a definition of Liberalism so broad that it could include Dickens (who of all 19th-century writers Chesterton most resembles) and Jeremy Bentham is simply unusable.

The problem of terminology and classification lies more in the men surrounding Chesterton than in Dale’s attempt to find an apt label. Liberalism is at least one some of these men placed on them­selves. But as that cumbersome term distributism shows (if nothing else), they well understood that they represented something altogether out of the mainstream of English social thought. The key to this thought lies more in the social encyclicals of Pope Leo XIII than in the vagaries of the Asquith administration. The call for the widest possible dis­tribution of private property, and for the fostering of individual craftsmanship, is not the wild-eyed utopianism that most current writers — including Dale, as well as J.P. Corrin and Dudley Barker — seem to think. Can anyone who has read a book by Chesterton seriously entertain the idea that he could for a moment be duped into siding with crackpot ideas? It is about as likely as Tolstoy volunteering for the British Army. Chesterton’s primary thought was for the church and the faith. The faith’s social application was expounded in the Pope’s encyclicals (the current Pope reiterated the same principles in Laborem Exercens, part of which was printed in the March 1982 issue of this magazine). The Distributist League, for all its fail­ings, represented a serious attempt in the English-speaking world to take the Roman Catholic Church’s stand on social matters at face value. If that is crackpot (as Dale calls Eric Gill, a principle distributist thinker), then the Catholic Church’s so­cial position is crackpot. And that, I for one, will not say.

But these are matters for discussion over something cool. O for a night at the Deveraux or perhaps some contemporary equivalent where these matters could be discussed with friendly en­mity! One cheer for the positions taken, then — but three cheers for a memorable book.

With esoteric ease he dipped

His pen in errant red

And wrote with tremendous laughter

Things that cannot be said.