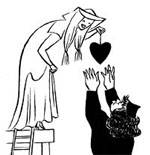 Prolifers had the time of their lives with Ronnie and George, but the party’s finally over. Morning in America came and went. Now it’s the morning after. Ronnie and George have waltzed out of town for good, and it’s hard for prolifers to decide what hurts more, the heartache or the hangover.

The much-touted love affair between prolife and Reagan/Bush has actually been a one-way street. Love is often blind, and so, for 12 intoxicating years, prolifers have by and large refused to believe they were being strung along. But maybe now that prolifers are left with little more than dirty ashtrays and empty bottles, they’ll get sober and wise up — and listen.

Consider the evidence. As Governor of California, Ronald Reagan signed one of the most permissive abortions laws in the country (at that time). When running for President in 1980, he said he had changed his mind on abortion (the Gipper as the original abortion flip-flopper), and promised in writing to pick a prolife running mate. But he first offered the job to pro-choice Gerald Ford (who declined). Then he offered it to pro-choice George Bush, who, when campaigning for the GOP presi­dential nomination in Florida in 1979, had told prolife leader Dr. Bart Hefferman, who had queried him about his views on abortion, “Go f— yourself!” Charles E. Rice had observed that were Reagan to select Bush, “Reagan would clearly signal to the prolife movement that the [abortion) issue is not that important to him and that he is therefore not to be trust­ed on it.” Reagan did pick Bush, but Rice, like the vast majority of single-issue prolifers, voted for Reagan anyway.

Linda Zumpano asked, “how many more promises does he have to break” before prolif­ers realize Reagan can’t be trusted on abortion? Zumpano, whose clearheadedness was a rarity among prolifers, was supporting Ellen McCor­mack for President on the Right-to-Life Party ticket.

A revealing vignette about the priorities of the Episcopal Church...

"Some" - not "many - Polish priests renounced their ministry in the face of Nazi evil.