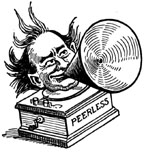 A SECULAR RELIGION WITHOUT HOPE

Political correctness (PC) began around 1968, when the American Left yielded to intense neotribafism. PC is also associated with cultural postmodernism and the philosophy of the despairing Enlightenment, according to which it is neither possible to draw sustenance from the past nor overcome its burden.

The Supreme Court contributed to PC in 1973, by its intervention in the abortion dispute, which set the stage for attempts to impose relativism on crucial issues. But it took some time for assaults on traditional conceptions of education to develop a militant energy: It was in 1988 that Stanford trembled before the chant, “Hey, hey, ho, ho, Western culture’s gotta go.” Only in the early 1990s did PC receive its name.

The power of PC in the contemporary academic and cultural world is easily exaggerated. Politically incorrect books and articles get published in distinguished places, and politically incorrect people hold named professorships at distinguished universities. But PC power is real enough, as nontenured academics will inform you, and its milder versions have great influence in places like The New York Times, The New York Review of Books, and the Clinton Administration. PC has also made inroads in the religious world, especially among liberal Protestants and Reform Jews, but to some extent even among Catholics.

Understanding PC requires understanding the social position of its adherents. Yes, one can make too much of the elite credentials of PC people: Pat Robertson, like President Clinton, has a law degree from Yale. But PC remains the outlook of those who consider themselves, and to some extent are considered by others, the most sophisticated element in American culture.

The Liberal as Graceless Pharisee

Review of Flannery O'Connor and the Christ-Haunted South

Not the Whole Story

Review of Race by Studs Terkel

The Darwinian Basis for Eugenics

Review of Darwin Day in America