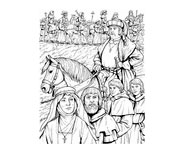 On a misty mid-January morning earlier this year, my husband, older son, and I were driven by our hotel host, Adem, southwest out of Selçuk, Turkey (pronounced “sell-chuck,” about two miles from Ephesus), and up Bülbül Dag (Nightingale Mountain). Our destination was the House of Mother Mary, or Meryem Ana Evi as the Turks know it. As we rose higher and higher on the winding mountain road, views of the Aegean Sea on one side, and the agricultural town of Selçuk (reminiscent of small Irish towns with tractors chugging down the main street) on the other, alternately opened up before us. We could still see wisps of mist in the low-lying areas, but within minutes we were in full radiant sun.

In another few minutes we had completed the 5.6-mile journey, arriving in a wooded, park-like area. A large parking lot has been built to accommodate tour buses, but on this particular day, there were only a handful of cars. (January is the off-season.) We walked up the path, past the inevitable vendors of postcards, icons, and other holy items (profane items too), past the olive trees planted by priests of the Vincentian order, and the statue of Mary that greets visitors, and past the covered outdoor area adjacent to the house where Popes John Paul II and Benedict XVI said Mass when they visited the site in 1979 and 2006, respectively (daily and Sunday Masses are regularly celebrated here).

LINK: Photos courtesy of Çakan Osman Tanidik
Dappled light from the surrounding trees filtered down upon the modest, honey-colored, stone-and-brick house adorned with a façade of three shallow arches. Standing there gazing at the house, and knowing that many factors had worked together to enable us to be present at that moment, I felt that a small miracle had occurred. With its lovely woods and many pine trees, the surrounding environs might have partly explained the profound peace I felt, but those physical characteristics could not completely account for my sense that I was standing on holy ground. The center of the three arches served as an entry way, so I went in.

Once inside, I was struck with the simplicity and elegance of this house-become-chapel. Sadly, for this shutterbug, photography is not allowed inside the chapel. On the positive side, I was released from involvement with a mechanical contrivance that can obscure or obstruct the real experience of being in a place. A lone nun was praying before the altar, and I too knelt to pray. (Because of the special status accorded to Mary in Islam, Muslims are often seen performing namaz — prayer — in this chapel, although none was present this day.) A soberness and peacefulness borne of gratitude overwhelmed me. The deep stillness I felt brought me close to tears, but few words came. How does one describe simultaneous joy and sorrow?

While some religious phenomena and some paranormal phenomena share some of the same qualities, that does not mean they are all the same thing.

The Power of the Virgin