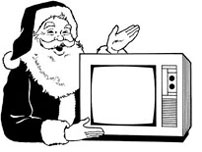 By Wayne Lela | June 2001
Wayne Lela is a member of the Committee on Family and Social Health, a group of writers and activists in the Chicago area. Copyright © 2001 Wayne Lela.

Back in 1964 Marshall McLuhan catchily observed that “the medium is the message.” The key truth he aphoristically conveyed is that, regardless of the content or programming of a particular medium such as TV, just the fact that we employ that medium has an affect on our society.

To illustrate McLuhan’s principle via television: When a person turns on the TV, that person generally does so for self-satisfaction (“entertain me”), regardless of what program is watched. In other words, the mere fact that TV exists helps facilitate and promote self-serving activities (i.e., narrow self-absorption or selfishness).

Watching television, by its very nature, is generally not a socializing activity; it is an unsocial “passivity.” When we watch TV, we generally do not actively do things with others; instead, we passively let things be done to us. We let ourselves be amused or (we may hope) informed, etc.

Because TV is not usually a socializing medium, it is entirely possible that TV, far from uniting us in some sort of global village, is actually dividing or balkanizing us. We not only seem to be becoming more selfish (consider recent catch-phrases: “do your own thing,” “the me decade,” “make your own rules,” “determine your own truth”), but we are segregating into distinct groups. There are separate TV channels for African-Americans, Hispanics, women, devoutly religious people, pornography lovers, intellectuals, sports buffs, etc.

For many reasons I do not often watch television. Don’t get me wrong: I used…