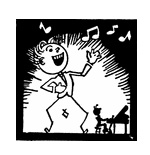 By Casey Chalk | June 2022
Casey Chalk, a Contributing Editor of the NOR, is a contributor to The American Conservative and The Federalist. He is the author of The Persecuted: True Stories of Courageous Christians Living Their Faith in Muslim Lands (Sophia Institute Press, 2021).

Once, when I was a child, my grandparents took me to a local barbecue joint in western Virginia. While we were enjoying our pulled pork, my grandfather’s ears perked up and he turned to my grandmother. “Do you recognize this song?” he asked. He smiled and began to hum along. It was a tune that had been popular when they were dating in Newport News and Norfolk, where he served in the U.S. Coast Guard during World War II.

Just for a moment, it was as if I could picture my grandparents, then in their late 70s, as two young lovebirds enjoying a meal at some old Tidewater diner. The memory has stayed with me only because this behavior was out of character for my grandfather, who wasn’t typically given to wistfulness or romantic sentiments.

But that’s what music, even the most unsophisticated kind, is capable of doing to us. A single song can open the floodgates of memories long forgotten, drawing us to a distant place and time, which we remember with fondness or, perhaps, regret. Faces and voices return to us, and we wonder if those they belong to ever think of us and those shared experiences. Sometimes, we sense in that moment, however inchoately, a real communion with those persons, whether living or dead. “Music is the art which is most nigh to tears and memory,” said Oscar Wilde.

Pop music is an especially strange phenomenon in this regard. The sounds that lurk in the background of some of the most meaningful moments in our lives — a celebratory dinner with family, a drink with a prospective romantic interest, a road trip with dear friends — come and go with seeming carelessness. Songs that once commanded the airwaves soon filter out of rotation, often with few bothering to notice. We can go years without hearing them, until they resound in the most random of circumstances: at a dentist’s office or in a car commercial on television.

Liberalism is pop culture, and pop culture is liberalism. It flows out in a torrent from the amps of the tattooed crooners of our woe-befallen land.