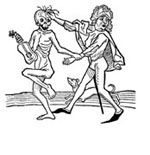 LIVING IN THE GAP

By Robert Benson | October 2013
Robert Benson retired in 2009 from teaching medieval English literature and Dante (in translation) at the University of the South in Sewanee, Tennessee. His latest book is Wedding the Wild Particular (Texas Review Press, 2012). He and his wife were received into the Catholic Church in 1993.

“Even base and disgraceful things have filled me with a kind of joy — things which now I detest and execrate when I recall them — and at other times I have had joy in good and worthy things which I remember with longing, though they may not be with me any more, so that I am sad when I recall the joy of the past.”—St. Augustine

In the ninth canto of Purgatorio, Dante confesses his sins and climbs the three steps up to the gate of Purgatory proper. The steps represent confession, contrition, and satisfaction — the three elements of a good confession. Dante sees himself and his sinfulness honestly, acknowledges his fault, is admitted to Purgatory, and is given a penance: the seven P’s inscribed on his forehead by his angelic confessor. He will climb Mount Purgatory as a penitent sinner, not simply the tourist he was in Hell, and he will have each of the seven deadly sins wiped away as he climbs the mountain.

When he enters the Earthly Paradise, “fashioned to be the natural nest for man,” he does so with recovered innocence. He enters as a new man, freed by the grace of God, and by his own cooperation with that grace, from all of his sins and fit to reclaim the innocence lost by human sin. It is odd, under these circumstances, that Dante is compelled by Beatrice, his guide in the last four cantos, to make what is frequently called his second confession. Speaking of Dante’s sins in Canto XXX, Beatrice accuses him of infidelity: “He took himself from me and gave his love / To someone else.” Dante breaks under her charge: “So did I shatter then, weighed down so low / under that burden, spluttering sighs and tears.” He confesses that “things of the passing day, / when your face was hidden from my sight — / their lying pleasures turned my steps away.” Beatrice calls this a confession.

Renowned Anglican writer Dorothy L. Sayers observed that only at the top of Mount Purgatory, having recovered his lost innocence, can Dante see his sins as the true horrors they are. The second confession is required because the newly purged sinner sees even the most trivial of his sins through God’s eyes for the first time. The “nettle fire of penitence” so stings Dante that he faints. He recovers from his swoon to find Matilda drawing him across Lethe; the passage through that water allows him to forget his sins. What a generous gift that is, a consolation to hope for. Freed from sin at last, Dante is no longer troubled by the recollection even of repented sin that darkened his earthly days. In the final canto of Purgatorio, Dante drinks the waters of Eunoë, which restore his good memories, as Matilda’s explanation in Canto XXVIII makes clear:

For on this side [the stream] descends with the power
to take away all memory of sin,
but on the other side it will restore
All memory of good deeds.

The Lord’s “‘forgetting’ of our sins,” Anthony Esolen writes in his translation of the epic poem, “enables us to remember the innocent life we have lost.”

That Mosquito on the Tuxedo

Neuhaus also made this pointed remark about me in that brief response: “I have no…

Review of Light in Darkness: Hans Urs von Balthasar and the Catholic Doctrine of Christ's Descent into Hell