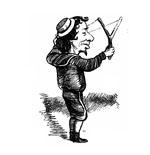 Is the secular world finally catching on to the false promises of feminism? For forty years now American women have been told that they don’t need men to complete themselves or to find success in life. “A woman needs a man like a fish needs a bicycle” is one of radical femi­nism’s most famous rallying cries — one that carries significant cachet among the lesbian set. Men, for the rest of the libbers, aside from being objects of occasional sexual comfort, are but useless anomalies in this woman’s world.

For Americans, even for American women, finding success and completing oneself have heavy economic overtones. They are typically defined in financial terms and measured by upward mobility: How far have you traveled in your “career path”? Can you afford the “finer things in life”? While offering gender-based complaints about “access,” most of mainstream feminism has been restrained in its overall critique of our reigning economic system. Perhaps that’s because what feminists really wanted was entry into the rat race.

And that they got — but at a cost. Whether by coincidence or grand design, women began to move out of the home and into the workforce in a time of cultural upheaval, around the same time that sexual relations were being severed from marriage on a vast scale. Starting in the late 1960s, long-term commitments were becoming increasingly tenuous: divorce rates skyrocketed, serial cohabitation became fashionable, promiscuity was winked at. Ironically, the movement to liberate sex from the confines of marriage ended up making sexual relations extremely complicated. Yet the notion that women could “have it all” still held sway throughout the 1970s.

But with the new social arrangement — men and women working side-by-side more and more but living side-by-side less and less — the burgeoning number of unmarried women who wound up pregnant (and who admirably chose not to abort their offspring) were faced with the prospect of raising kids on their own, juggling the duties of two parents and the demands of a job. Their menfolk meanwhile were free to do whatever they pleased: pursue a career, lounge around, be a part-time dad, seek out new sexual conquests, whatever. Who said feminism has been a drag for men? It’s served their base instincts quite nicely.