Volume > Issue > Is It 'Triumphalist' to Acknowledge Europe's Christian Roots? 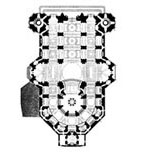 Is It ‘Triumphalist’ to Acknowledge Europe’s Christian Roots?

By Timothy D. Lusch | July-August 2016
Timothy D. Lusch is an attorney and writer. His work has appeared in Saint Austin Review and the websites of Crisis magazine and New English Review. He blogs at www.pityitspithy.com.

“The reason that he zealously strove to make friends with the kings beyond seas was that he might get help and relief to the Christians living under their rule.” — Einhard, The Life of Charlemagne

In A.D. 732, somewhere between Tours and Poitiers in north-central France, the army of Charles Martel, the “Hammer,” commander of the Franks, laid waste to an invading Muslim army led by Abd-al-Rahman, ruler of the Umayyad caliphate. Charles’s victory checked the advance of the Muslim invasion from al-Andalus, thereby securing the future of Europe against the fate of the Levant, Maghrib, Mesopotamia, and other regions subsumed by Islam in the previous hundred years. Charles’s grandson, Charles the Great, Charlemagne, became the first Holy Roman Emperor and presided over the unification of much of what ultimately would be called Europe. More importantly, under the banner of Christianity, the spiritual unity of diverse peoples was established. It is in his honor that the city of Aachen, Germany, awards the occasional Charlemagne Prize to a recipient who is an exemplary promoter of European unity.

More specifically, the Charlemagne Prize is awarded to public figures or institutions “distinguished by their outstanding work toward European unity or cooperation between its states.” The award recognizes efforts in areas such as literature, politics, science, and economics. The idea for the prize initiated in a literary society consisting of Aachen’s aristocratic elite. Led by local businessman Kurt Pfeiffer, and preoccupied with the fragility of peace during the onset of the Cold War, organizers of the prize sought to “win over the Western public to the idea of a united Europe” so as to provide a forum for peaceful resolution of continental conflicts.

In its Public Declaration of 1949, the founding document of the Charlemagne Prize, Aachen’s border location is viewed as having a geographic obligation to mediate conflict in Europe and overcome “national narrow-mindedness.” The titular invocation of Charlemagne was an attempt by the prize’s founders to infuse an historical sense into the modern mission of European economic and political unification. Rather telling, in light of the myriad crises now facing the Continent, is the organization’s current view of its founding document as “an artifact of its era, shaped by an anti-communist European image with strong Catholic tendencies.” In awarding the prize to Pope Francis this year, the organizers demonstrated, and the Holy Father confirmed, the fatal flaw at the heart of the modern European project — a flaw that is destined to have tragic consequences.

Pope Francis’s acceptance speech upon receiving the Charlemagne Prize (May 6) is troubling for many reasons. Most significant, however, is His Holiness’s profound misunderstanding — possibly even disregard — for the historical, spiritual, and cultural essence of Europe. Arguably, one may even go so far as to say that he is tone deaf to the screaming reality of the Continent today. And strangely, the conversational tone Pope Francis has become known for gave way to an internationalized, agenda-driven stump speech in Eurospeak. Despite his attempts at metaphor in describing the Continent and its ills, he offered neither a balm for the body nor a salve for the soul of Europe.

Our new Pontiff has new ideas and a new manner of delivery. Even as we are jolted about by his surprises, we see that he is staying faithful to his mandate.

Today, transgenderism is firmly established in the cultural landscape. Who will cut through the cant, expose the cultural masquerade, and proclaim the truth? Our religious leaders?