Volume > Issue > Is Hell Closed Up & Boarded Over? 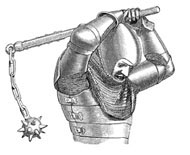 ON BEING MORE TENDERHEARTED THAN GOD HIMSELF

By David Watt | February 1999
The Rev. David Watt is a priest of the Archdiocese of Perth in Australia. He holds a doctorate in philosophy from Cambridge University (England) and a licentiate in theology from the Gregorian University in Rome. This article was first published in different form in the Australian newspaper Catholic.

Hell is admittedly a disturbing concept. But then, Hell is a terrible thing. No one seems comfortable with it. But then, no one should be. Unease, self-doubt, anxiety about the painful and infinite consequences of my actions, fear of an eternity deprived of God’s presence — all these come up when I think of Hell.

No wonder few talk about it, even among those charged with the cure of souls and the teaching of the faith. Most ignore it, and a few speak against it. A priest who preaches at Mass week after week but from one year to the next never mentions Hell thereby conveys to his people that the concept is one they need not grapple with and the destination is not even on the map.

The few who are willing to talk about the afterlife take various approaches. Some mumble comfortingly that probably everyone goes to Heaven, or that at least we can hope everyone does, and that we can’t know that anyone doesn’t, and that our loving God will likely see to it that we spend our eternity fairly pleasantly. Some speak out explicitly, saying that salvation for everyone is certain or at least likely or at least cannot be disproved.

Communio, the premier journal for whooping up Hans Urs von Bathasar, informs us confidently that all men are indeed saved.

Jesus spoke of the evildoer as being in the netherworld, separated from the just by an impassable chasm, and tormented in flames.