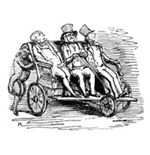 By Carl Sundell | March 2015
Carl Sundell is Professor Emeritus of English and Humanities at Quinsigamond Community College in Worcester, Massachusetts. He currently resides in Lubbock, Texas.

The mathematician and physicist Isaac Newton (1642-1727) was born the year Galileo died. Though in many quarters Newton is considered the greatest scientist who ever lived — a 2005 Royal Society survey ranked him above Einstein — Newton had a dark side. A loner and lifelong bachelor, he was often not polite in conversation, and he resented the talents of his scientific rivals. A measure of anxiety and melancholia dogged him. He threw himself completely into his work, to the extent of giving lectures even when no one was present. Psychologists have speculated that he showed symptoms of Asperger’s syndrome. Yet his total absorption in any topic that interested him resulted in the most profound insights. And we know that Newton was not without a sense of humor, as is evident from his famous quip: “Gravitation is not responsible for people falling in love.”

Born to Anglican parents, Newton repudiated the doctrine of the Trinity. He claimed to find no reference to the Trinity anywhere in Scripture (despite Mt. 28:16-20), or any reference to the divinity of Jesus (despite Jn. 1:1-5). Some have suggested that, were he alive today, he might be a Unitarian. On the other hand, had he lived in our atomic age, the Trinitarian God might have seemed more credible to him. Newton might have noted that the universe itself is fundamentally trinitarian, a kind of atomic mirror reflecting its Creator, in that atoms are composed of electrons, protons, and neutrons.

Unlike today’s advocates of scientism (the belief that there is no reliable knowledge outside of science), Newton believed that science can help us read the mind of God. Indeed, he regarded Scripture as a scientific text in its own right: “No sciences are better attested than the religion of the Bible,” he wrote. Scientific principles could support the case for God that would be consistent with the cosmological (first cause) and teleological (intelligent design) proofs held by Plato, Aristotle, and Thomas Aquinas.

Newton rejected atheism as “senseless and odious.” Though he lived centuries before the Big Bang theory, which has challenged the old atheist assumption that the universe is eternal, Newton was able to bring the limited perspective of eighteenth-century science to bear on the question of a First Cause, or Creator God. A brief formulation of the cosmological argument is that since everything in the universe has a first cause, it is reasonable to infer that the universe itself must have a First Cause, otherwise called God.

Kirsch's absorbing personality profile of the scrupulous, dogmatic, and uncompromising John portrays him as a man in great distress in a pagan culture.

Scores of extra-canonical Jewish and Jewish-Christian writings were composed during the period between 300 B.C. and A.D. 200.