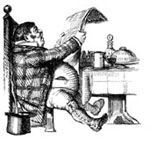 Is America Unfit for Spiritual Self-Government?

By Chene Richard Heady | October 2013
Chene Richard Heady is Associate Professor of English at Longwood University in Farmville, Virginia. His articles have been published in Touchstone, Renascence, The Catholic Digest, and other periodicals.

We’ve all heard about the vocations crisis — perhaps more often than we’d like. The statistics are depressingly easy to recite and were summarized yet again in last year’s authoritative sociological analysis of the priesthood in the U.S., Same Call, Different Men: The Evolution of the Priesthood Since Vatican II, conducted by Georgetown University’s Center for Applied Research in the Apostolate (CARA). The good news is that American ordination numbers have ceased their freefall, stabilizing at about 450 a year. The bad news is that we would need to ordain three times this number on an annual basis just to replace the priests who are dying or retiring. It’s encouraging to hear that, despite the clerical scandals of the past decade, the American Catholic population continues to grow at the rate of one to two percent annually. But a larger laity means a clergy stretched ever more thinly. We have, on average, one priest for every 1,400-1,500 laymen, and about as many priests as parishes. As the late Fr. Richard John Neuhaus once noted, most American priests pastor congregations that our evangelical Protestant brethren would consider megachurches, and they do so singlehandedly, without a megachurch’s enormous cadre of boutique assistant pastors catering to carefully designated demographic groups. Finally, the mean age of American priests is 63, early-retirement age for many Americans. We are asking potential retirees to take on a burden that most mortals would find insupportable.

The situation is even more dire in the South. American Catholics are twice as likely to be Southerners as they were in 1950, and Southerners now comprise 23 percent of the American Catholic population; but, as in the rest of the country, clergy numbers have not risen correspondingly. In the Diocese of Richmond, Virginia, where I reside, only about half of the parishes have a resident diocesan priest.

This data is familiar to most of us, but its meaning is more elusive. It is generally agreed that the clergy shortage is one of the fundamental signs of the times — perhaps the fundamental sign — for the Catholic Church in America. But we seem to be unable to interpret this sign; we can reach no agreement as to what it means. In traditionalist quarters, the problem is blamed on the abandonment of the Latin Mass or the introduction of altar girls. It is believed that if the priest appears not to be a man set apart to celebrate a sacred rite before God, but rather a democratic presider over a shared congregational meal, then young men will not be inspired to accept the sacrifice the vocation demands; what is needed to solve the crisis is a change in the rite (or the rubrics). In progressivist quarters, the problem is pinned on the male priesthood itself. Since contemporary culture considers both hierarchical models of government and masculine authority to be oppressive, intelligent and sensitive young men will naturally refuse to join the priesthood as it is presently constituted; what is needed to solve the crisis is a change in the very structure of the Church.

American Catholics who make the first argument skeptically dismiss the second; those who make the second argument skeptically dismiss the first. And, whatever one’s theology happens to be, the skepticism is understandable since both sides are using the crisis as argumentative fodder to support positions they would hold even if it had never occurred. If ordination numbers were exploding, traditionalists would still favor reviving traditional practices, and progressives would still support structural change. Our division and skepticism prevent the American Church from addressing the vocations crisis in any coherent or unified way.

We see kids on the street with guns and stacks of $100 bills. There’s no rule of law, no belief in anyone’s laws -- not man’s, not God’s.

The Life & Thought of Titus Brandsma

Modern man, reserved and calculating, must restore true heroism, true spontaneity to his life, Brandsma taught, so that love, sacrifice, and courage may be allowed to perfect our human nature.

Crisis dumps the Catholic Press Association, but for all the wrong reasons.