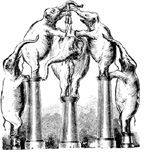 “Inclusive Language”: Is It Necessary?

The title of my article asks if so-called inclusive language is necessary. A typical reply to this question today might well be “Necessary? We have it; it’s here; it’s not likely to go away.”

“Inclusive language,” as today’s feminists understand the term, means avoiding the generic use of nouns such as “man” or “mankind” when referring to all human beings, and avoiding the use of the masculine gender pronouns, “he,” “his,” and “him,” either when referring to a generic singular antecedent such as “everybody” or — a much more serious issue from the Catholic point of view — when referring to God revealed and understood as “Father.” According to feminist theory, “man” and related words, as well as the masculine gender pronouns, refer primarily or exclusively to males; women are therefore held to be “excluded” by the use of these words. Hence there is the perceived need to deploy language which “includes” them, saying “person” instead of “man,” or “humankind” instead of “mankind,” for example; this is “inclusive language.”

Related to the inclusivity question is the avoidance of the use of the feminine gender third-person singular pronoun, “she, ” to refer to anything but an animate female individual, and, in general, the avoidance of any words or expressions considered insulting or demeaning to women.

The elites of our society today have largely granted to the feminist movement the right to dictate language usage with respect to these questions. Thus special, often laboriously coined language specifically “inclusive” of women seems to have become, at least for the moment, de rigueur in modern American culture; it is held to be required by courtesy, if not by simple justice, to women. The case for it is generally not even argued any longer, if it ever was truly argued; it is simply taken for granted.

Giving an Appearance of Solidity to Pure Wind

When considering Muslim tolerance, one might inquire: Are Muslim attitudes toward drinking alcohol tolerant? And how about free speech? Women's rights? Freedom of religion? Music and Art?

Parent Is a Noun, Not a Verb

When we firmly reject using the language crafted by the ideologues of modernity, we strike a blow for sanity.