Volume > Issue > In 1531, Mary Intervened to Prevent a Clash of Civilizations 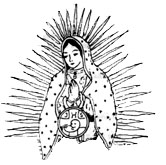 WILL SHE HAVE TO AGAIN?

By Jim Coop | February 2007
Jim Coop, a freelance writer living in San Carlos, California, assists the Knights of Columbus Council 3051 in their project to promote authentic Catholic education. For more information about the Council, email kocpgk@hotmail.com.

“Am I not here, I who am your Mother? Are you not under my shadow and protection?” The Blessed Virgin Mary spoke these words to an Indian merchant on December 12, 1531, during the last of her several appearances to him. It is quite probable that one of the consequences of these apparitions was the prevention of an armed revolt of the Mexican Indian population against their Spanish conquerors. Another was the greatest mass conversion to Christianity in the history of the Church.

Today, we are being told that there is a “clash of civilizations” between the Western and Islamic worlds. Few people, however, are asking if the Mother of God can help prevent this clash from becoming cataclysmic. Likewise few people know that the Koran — yes, the Koran — speaks of her in this manner: “The angels said O Mary, God has chosen and purifies you…. He has chosen you above the women of the world.”

It has been nearly 500 years since Mary appeared to Juan Diego and his uncle Juan Bernardino in a series of five apparitions and left an image of herself on Juan Diego’s tilma, in what might rightly be called history’s greatest ongoing miracle. Many things have changed since December 12, 1531. The “age of faith,” which contributed to the Spanish conquest of the New World, has essentially disappeared from the Western world. Ironically, if it exists at all, it is much more likely to be found in the Islamic world, albeit sometimes in a violent, corrupted, and even criminal form. Still, there are some lessons from the apparitions that can be very relevant to the problems of today, including the “clash of civilizations.”

When Mary appeared to Juan Diego on Tepeyac Hill in 1531, it had been a little over 10 years since Spanish explorer Hernán Cortés, his fellow conquistadores, and their Indian allies conquered the Aztec empire. Like Isabella, the great Catholic Queen of Spain, Cortés and many of the conquistadores did have a desire to convert the native populations they subdued to the Catholic Faith. For Isabella, this was very important and a major reason she helped finance Christopher Columbus’s first voyage to the New World in 1492. For many of the conquistadores, however, once they arrived in the New World, their concern for the spiritual welfare of the native populations seemed confined to the next world, and they acted like they wanted the natives to get there as soon as possible. The great distance between Spain and the New World greatly hampered the Spanish Crown’s efforts to curb these abuses.

Today, when million-dollar publishing con­tracts are given to semi-literates to recite steamy tales calculated to…

Two-thirds of Christendom’s original territory — including Jerusalem, Antioch, and Alexandria — were swallowed up by Islam and thoroughly Arabized.

When our God came to earth He did not reject the human pleasures He had created: He ate and drank, and worked His first miracle at a wedding feast.