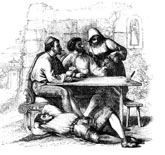 SEXUAL POLITICS & THE BIRTH OF THE WEST

It’s a commonplace to say that homosexuality has metamorphosed within the memory of most from a furtive perversion to an ostentatious “preference,” from the love that dare not speak its name to the love that can’t stop talking about itself. Homosexuals are no longer a scarcely visible presence asking only to be left alone, but a force that politicians confront at risk of early retirement. Homosexuals not only parade in the streets but are even given the shelter of police cordons while they mimic practices still on the statute books. The epidemic that they have visited upon themselves and (dare it be said?) upon others has rightly been called the only politically protected plague in history. Homosexuals who have contracted it are treated with something akin to reverence, while those who have succumbed to it are often anointed martyrs.

All this, friend and foe will agree, amounts to a revolution not only in morals but also in the notion of normality. Like every revolution, it has generated a new vocabulary, entailing in this case a fastidious flight from terms that recall the classic view of homosexual acts. The word sodomy, for example, has become indecent, provoking the abhorrence once aroused by the act itself. But an even more significant effect of this revolution in vocabulary, in normality, and in morals is found among certain Bible scholars.

Some biblicists, perhaps constituting a critical mass, display great ingenuity in trying to explain away scriptural condemnations of homosexual acts. A biblical dictionary published in 1996 by HarperCollins deflects the Sodom story by claiming that the sacred writer is condemning only an inhospitable attempt at gang-rape, and then proceeds into ludicrousness: This dictionary thinks it likely that, where the Epistle of Jude warns of hellfire awaiting those who fall into the “unnatural lust” of Sodom, “the ‘unnatural lust’ mentioned there is that of mortals for angels (Lot’s visitors).”

Nor does the miter immunize against this revisionism. The current Archbishop of Milwaukee has assured his flock in his diocesan newspaper that the “harsh” things St. Paul said on the subject were directed against “heterosexuals engaging in homosexual activity” and against “homosexual activity…associated with orgiastic pagan ritual sacrifices.” At least that’s less implausible than claiming that by “unnatural lust” the Bible means men lusting after angels.

Terror at the Disco: Why the Experts Always Come Up Empty

Again after the Orlando massacre, the national conversation about anti-gay hatred studiously avoided any mention of Islam and the Muslim view of homosexuality. Anger was directed primarily at conservative Christians.

Chancery decisions on thorny issues, like Church funerals for notorious apostates, are best made for the salvation of souls, and not for the bishop's good name or the Church's public image.

More Magical Moments With Our Bishops

The USCCB document instructs that everyone, not just homosexuals, is in need of "training in virtue" and needs to strive for "growth in holiness."