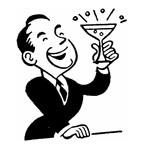 We’ve been champing at the bit, anxious to make this announcement. We’ve been poised and ready to run with this thing since the New Year began, but prudence dictated that we take the necessary time and measures to work out the remaining kinks in the system before going live.

Now, at last, it is our great pleasure to announce the launch of the “mobile version” of the NOR.

Readers will recall that in October 2012 we began raising funds in order to make the NOR available in digital form, customized for handheld mobile devices: smartphones, e-readers, and tablets of all kinds, including Kindles, iPads, Nooks, etc. It took us over a year to reach our fundraising goal; from there it took us another year to get the project off the ground. And so, two and a half years later, we again express our gratitude to those whose prayers and donations helped carry us to this point.

And now to the nitty-gritty.

The Most Equivocal Man In Town

According to San Francisco's Archbishop George Niederauer, homosexuality had nothing to do with clergy sex abuse cases.

A Picnic on a Tombstone & Other Reflections

In my home country, the Netherlands, you still see many large wagon wheels, not on…