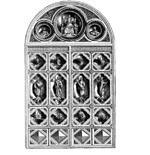 By Thomas Basil | November 2012
Thomas Basil is a 1996 convert to the Catholic Church who resides in the Archdiocese of Baltimore. His trip to the Ukraine took place in October 2011. Six earlier articles on his travels in Europe have appeared in the NOR.

On a walking tour of Kyiv, the capital of the Ukraine, and once dubbed “The Vienna of the East,” I stood on a majestic bluff overlooking the Dnieper River. The site is crowned only by a bland office building. Our guide waxed eloquent about its nondescript 1960s-style boxy architecture. Only gradually did I come to realize that her sarcasm was a prelude to her tale about the majestic Orthodox cathedral that once stood on this spot and that today exists only in old photo archives. The cathedral was one of one hundred and forty-five churches dynamited in Kyiv under communist-style separation of church and state, visible today on YouTube in grainy Stalin-era film clips of exploding cathedrals.

Walking elsewhere in Kyiv I was pointed to the headquarters of the Ukrainian version of the FBI, but was told that it belonged to the KGB before that, and to the Gestapo before that. I asked a Ukrainian Catholic friend to pose with me there for a souvenir snapshot. He flatly refused, even though he was too young to have personally experienced anything of the Soviet or Nazi eras. In his refusal I glimpsed an echo of the population’s innate fear of totalitarian governments and an inability to trust friends — two enduring legacies of decades of communist rule.

Earlier we had attended Mass at downtown Kyiv’s St. Alexander’s co-cathedral. It dates to 1815 and is named after Tsar Alexander I, who granted approval for the construction of a Catholic church in this Orthodox city. In 1937 the cathedral was confiscated by the government to house the offices of the Communist Agitation and Propaganda Department, whose charter mandated “the broadest possible education-enlightening and anti-religious propaganda.” It was returned to Catholic ownership in 1991 and re-opened after a three-year renovation. This unimaginable history explains its sparse interior adornment, so unlike what one expects upon entering a nineteenth-century cathedral.

In 1937 the pastor of St. Alexander’s was Fr. Sigis­mund Kwasniewski. He was imprisoned for four months and then executed, one of 3,600 Catholic priests legally martyred in the Ukraine by the communist government. His fellow sufferers included men like Redemptorist Fr. Zenon Kovalyk, who was arrested while delivering a homily on the Immaculate Conception. For this “offense,” Fr. Kovalyk was crucified on a prison wall, where he died.