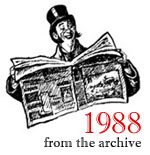 HOW STRONG A PRO-LIFE STANCE DOES 'SCRIPTURE ALONE' YIELD?

By Gary Crum | July-August 1988
Gary Crum is an Associate Professor in the Department of Health Services Administration at George Washington Uni­versity in Washington, D.C.

Ed. Note: Given that there is no explicit condem­nation of abortion in the Bible — while there is such in the Catholic tradition — we have been a bit puzzled as to how the sola Scriptura (Scripture alone) premise of fundamentalist Protestants can yield a strong prolife stance akin to that of Catho­lics. We have also wondered if fundamentalists un­consciously rely on the Catholic tradition to draw out the implications in Scripture. We asked Prof. Gary Crum, a co-founder of Southern Baptists for Life and a member of the Board of Directors of the Christian Life Commission of the Southern Baptist Convention, to explain the biblical reasoning most fundamentalists bring to the question of abortion. The results follow. As usual, comments from read­ers are welcome.

The ranks of the prolife movement have in re­cent years been swelled by conservative Protestants, and many people express curiosity about the road by which these evangelicals and fundamentalists have reached a prolife position.

Fundamentalists are those who believe that the Bible is without error, and they typically take a sola Scriptura approach in deciding God’s will, de­pending on the Holy Spirit to give them the correct interpretation of Scripture. (Evangelicals take a similar view, pointing to Scripture as the only rule of faith, but not all evangelicals would say that Scripture is necessarily without error at all points.)

Can a strong prolife view really be logically produced by reading Scripture alone? Is not a church hierarchy and lengthy theological tradition neces­sary to answer such a moral question in a definitive fashion? How could Scripture be tied together to produce a conclusion in the fundamentalist’s mind, seeing that there is nowhere in the Bible a defini­tive statement: “Abortion is murder”?

Not in the Limelight

Jim Holman is a Catholic who knows his money and talents are only a loan, and that he will have to account for them on Judgment Day.

Cardinal Gracias of Bombay condemned all abortions and promised a poor couple that the Church would raise their baby if he were allowed to live.