Volume > Issue > From Shiprock to the Rock 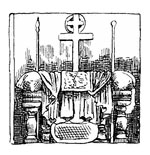 From Shiprock to the Rock

The last thing we were thinking when we moved from Madison, Wisconsin, to Shiprock, New Mexico, in 1989 was that our journey there would eventually lead us into the Catholic Church. But it did, thanks to very devout Christian Navajos and to the relentless leading of the Holy Spirit, even when we didn’t realize we were being led.

My husband, Robert, had been brought up Reform Jewish, but he had no real interest in passing on his religion to the next generation. My Christian grandparents in Switzerland were among the many who took in Jews and other refugees during World War II, but their faith in action did not carry over into my parents’ generation. My siblings and I did not grow up in any church, though we were all baptized as infants.

Robert and I aimed to do the right thing by moving with our two sons to Navajoland. We went to help people in need of medical care, and Robert accepted a job as a pediatrician with the Indian Health Service in Navajoland. But our time there was difficult in many ways. Robert had two daughters from a previous marriage, and we had a strained custody arrangement with his ex-wife, who thought we had too much time with the girls and too much influence on their lives. When we moved from Madison, the girls felt abandoned, and Robert felt rejected. I wondered during that first year in Shiprock if we could survive as a family without them. We might not have survived as a couple without the faithful atmosphere in which we found ourselves.

Robert and I were both avid readers, and we always read to our children. I had read everything I could find by Dostoyevsky and Tolstoy when I was in high school; Robert had spent his high-school years reading Thomas Merton. In Shiprock we continued our family tradition of reading bedtime stories to the children — just the boys were with us at that point — though by then they had almost memorized the Narnia series and had heard The Lord of the Rings books at least three times. I had come to belief in the 1970s under the influence of the Jesus Movement, but because of the different faith backgrounds of Robert, his ex-wife, and me, I was hesitant to give explicit Christian instruction to our children. However, Robert and I had no qualms about reading Christian-themed books to them. Little did we know the Holy Spirit was working on us the whole time.

We have some news: Elena (the Managing Edi­tor) and I, and our two children (Maria,…