Volume > Issue > I Am Not White 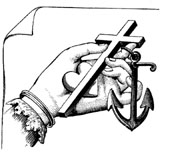 By Thomas Storck | November 2018
Thomas Storck has written widely on Catholic social teaching, Catholic culture, and related topics for many years. His most recent book is An Economics of Justice and Charity: Catholic Social Teaching, Its Development and Contemporary Relevance (Angelico Press, 2017). An archive of his writings can be found at www.thomasstorck.org.

The title of this article might puzzle those who know me or have met me or have merely seen a picture of me. With an ancestry mostly German, with a large English admixture and bits of Irish and Scottish, I might seem the very embodiment of a “white person.” But I deny it, and not only in recognition of G.K. Chesterton’s apt remark in his book Heretics (1905) that “we give to the European, whose complexion is a sort of pink drab, the horrible title of a ‘white man’ — a picture more blood-curdling than any spectre in Poe.” As correct as Chesterton’s statement is, there is a more fundamental reason for my refusing the designation white. That is because I deny that, however one might want to characterize my skin color — white or “pink drab” or whatever — using that color to assert anything important about me is nonsense.

In the tradition of Aristotelian logic, a definition is constituted by genus and specific difference. A human being, for example, is defined as a rational animal — animal being the genus or larger group, and rational being the specific quality that differentiates us from all other animals. If we were to define human beings as two-legged animals who walk erect, this would not be false, but it would not be a very good definition because neither two-leggedness nor our posture of walking get to the heart of what it means to be a human being the way rational does.

And neither does white — or any other color, for that matter — do a good job of defining any particular group of human beings. I say this not because I am ashamed of the color of my skin, any more than I am of the color of my hair or my eyes, but because the most salient facts about human beings are not those that concern such external or physical matters as skin color. I am quite proud of the European cultural heritage, but that cultural heritage has merely an accidental connection with being white or pink drab or any other color.

Now, I am aware that some argue that white is simply a marker, a substitute, for European or Western. After all, it’s simpler to say white than European or Western. But I disagree. First because focusing on skin color shifts the discussion to something superficial and distracts from what is essential. And second for a much more important reason.

Are Catholics the New WASPs?

For many, Catholicism as a religion has become irrelevant as they have capitulated to secular American culture, as did WASPs in the mainline Protestant denominations.