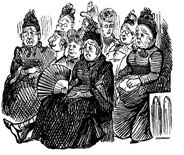 By George S. Mitrovich | January/February 1996
George S. Mitrovich, who was a press aide to Robert F. Kennedy in the 1968 presidential campaign, is President of the City Club of San Diego and the Denver Forum, both of which are nonprofit, nonpartisan public forums.

Rivers Patou, that’s his real name — it says so in gold letters on his dark blue baseball cap — is a Catholic priest. He’s also the Chaplain of the Port of Houston. (You didn’t know Houston has a port? It does.)

I was with Rivers last fall in South Bend, Indiana. We were there with our friends, Tom and Jann Brunner, and a classmate and colleague of Jann’s, Patricia Nemec, for the purpose of watching Notre Dame play Texas. Tom, Jann, Pat, and Rivers graduated from Notre Dame. Because they are intelligent, sophisticated, and urbane, they lack that certain fervor frequently associated in the popular mind with Notre Dame partisans, a fervor deeply resented by non-Notre Dame fans. But if you assume that means Brunners, Pat, and Fr. Patou are indifferent to what happens to Notre Dame football, you would be greatly in error.

The occasion for me was all the more meaningful because my son, Tim, was with us. He lives in Virginia and works for Tom Daschle, the Democratic Leader in the U.S. Senate. Tim had never seen the Fighting Irish play. Given the horrific beating the Democrats are taking from Republicans these days, I thought it would be good for Tim to be a part of something that at least had a reasonable chance of winning, as in Notre Dame over Texas.

The Brunners live in South Bend. Tom’s a lawyer. Jann teaches at St. Joseph’s High School. They see the Irish play often, but Fr. Patou makes his South Bend pilgrimage once a year.

'God Forgives'... Plan A & Plan B... Noblesse Oblige... A Layman Advises a Layman to Hide Under the Table... What Happened to Bill Donohue...

Individuality: The New Conformity... Sex, Lies & Dossiers: The Vatican at the Crossroads