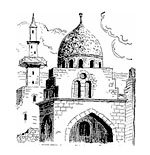 A RELIGION OF PEACE?

By Andrew Bieszad | May 2011
Andrew Bieszad has a master's degree in Islamic Studies and Christian-Muslim Relations from Hartford Seminary in Connecticut. He has conducted educational forums on Islam and Catholicism since 2007.

Muslims often claim that Islam is a misunderstood religion. This is partially true, insofar as many people do not understand the nature of Islam or what it teaches. Catholics are called to proclaim the Gospel to all people, including Muslims. However, it can be difficult to communicate Christ to a Muslim if one does not understand what the Muslim believes. The fact that Muslims have been aggressively proselytizing Catholics and other Christians has added to the confusion about Islamic theology. Let’s take a look at five common misconceptions about Islam among Catholics.

Certain characters, stories, and sayings from the Bible can be found in the Koran, including the stories of Adam and Eve, Noah, Abraham, Moses, Isaac and Ishmael, and Jesus. The Koran also borrows passages from the Jewish Midrash, the Jewish Talmud, and heretical texts written primarily by Gnostics during the second and third centuries A.D., such as the Infancy Gospel of Thomas. The Koran draws upon all these sources equally, but presents them as though they were unique to the Koran. In fact, Mohammed’s earliest detractors pointed out that the “prophecies” he uttered and the stories he told were little more than his own retelling of “fables of the ancients” from Christian and Jewish texts.

More important than the Koran’s plagiarism of biblical stories, however, are the different ways Muslims and Catholics view their sacred texts. The Church teaches that the Bible is the word of God composed under the inspiration of the Holy Spirit. Dei Verbum, Vatican II’s “Dogmatic Constitution on Divine Revelation,” articulates this teaching thus:

Sacred Scripture is the speech of God as it is put down in writing under the breath of the Holy Spirit… In sacred Scripture, God speaks through men in human fashion…. Attention must be paid, inter alia, to “literary forms, for the fact is that truth is differently presented and expressed in the various types of historical writing, in prophetical and poetical texts,” and in other forms of literary expression. (nos. 9, 12)

Islam, on the other hand, teaches that the Koran is the literal word of Allah — the uncreated and eternal word of Allah. Islamic theology maintains that Mohammed was merely the vessel through which the Koran was transmitted to the world. This has been the unanimous consensus among mainstream Islamic theologians since the ninth century. The obvious problem with this theological position, which is often ignored by Muslim theologians, is that because the Koran is the uncreated and eternal word of Allah, it possesses the same eternal nature as Allah. This means that the Koran itself is divine and exists one in being with Allah. As much as Islam denounces the Holy Trinity in Christianity, it uses the same type of Trinitarian theology to explain the relationship between Allah, Mo­ham­med, and the Koran.

The final major difference between the Bible and the Koran can be found in their purposes. The Koran is self-defined as a “book of guidance sure to those who fear Allah” (2:2), which will lead Muslims along “the straight path” (1:6-7) toward obedience to Allah. In other words, the purpose of the Koran is to bring men to obedience; salvation is found in submission to the Koran’s teachings.

The Catholic faith, on the other hand, emphasizes that salvation is not found in absolute submission to a book’s teachings, but in a loving relationship with God Himself in Christ: “For God so loved the world, that he gave His only Son, so that he who believes in Him might not perish, but have eternal life” (Jn. 3:16).

What Does the Pope Know About World Affairs?

Where hot wars are concerned, many of Ratzinger's most ardent admirers find themselves diametrically at odds with the Pope.

When a pope dies, he is pronounced dead by a physician, just as ordinary people…