Volume > Issue > Finding the Trapeze Artist in the Priest 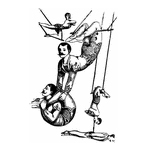 Finding the Trapeze Artist in the Priest

By Henri J.M. Nouwen | June 1993
The Rev. Henri J.M. Nouwen is a writer and lectur­er, a priest-in-residence at Daybreak in Toronto (a Catholic/ecumenical l'Arche community serving disabled per­sons), and a Contributing Editor of the NOR. He has taught at Yale, Harvard, and the North American Col­lege in Rome. Among his many books are The Wound­ed Healer and The Return of the Prodigal Son. The second part of this circus diary will appear in our July-August 1993 issue.

In April 1991, while staying in Freiburg, Germany, I went to see Circus Barum with my father, who was visiting me. I was so im­pressed by the “Flying Rodleighs,” a trapeze group of four South Africans and one Amer­ican, that I returned to the circus after my father had returned home to Holland.

One evening, after I had introduced my­self to the trapeze artists, they invited me to join them for their evaluation session after their performance and attend their practice session the next morning. During the time Circus Barum remained in Freiburg, my admiration not only for the trapeze act but also for the five artists themselves increased day by day. The seeds of friendship had been sown.

After Circus Barum had left Freiburg and I had returned to Toronto, where I live in the l’Arche Daybreak community, I kept in touch with the Flying Rodleighs through letters. In November — at their invitation — I returned to Germany to spend a week with them on their travels from town to town. During that week the idea grew in me to write a book — ­maybe even a novel? — about this remarkable group. They gladly gave me the freedom to interview them and write about them in any way I chose. I recorded their stories and thus came to know the three flyers — Rodleigh; his wife, Jenny; and his sister, Karlene — and the two catchers — Joe and Jon. Rodleigh, I dis­covered, had been a medical technician, Jenny a nurse, Karlene a sports instructor, Joe a welder, and Jon a clown with Ringling Broth­ers in the U.S. The Flying Rodleighs had been working together as a team since they joined Circus Barum in March 1990. Living with them for a week opened my eyes and heart to a new world of art, community, and friendship.

Back in Toronto, when I spoke about my experience with the Flying Rodleighs in my community, my desire to return and deepen my connection with the circus grew. Yes, I wanted to write about them, but to do that well I needed more immersion than a week would allow.

In a Divided Church, Even "Unity" Is Divisive

Why the Register fails to controvert dissent and identify dissenters.

Reviews of Genetic Engineering: Christian Values and Catholic Teaching by Paul Flaman... The Message of Heaven and Hell by Bruce Milne... Life, Liberty, and the Defense of Dignity by Leon R. Kass, M.D... Creed and Culture: A Touchstone Reader edited by James M. Kushiner... Callista: A Sketch of the Third Century by John Henry Cardinal Newman

Niebuhr believed that many of the values of democratic society, while highly prized in the West, are neither understood nor desired outside the West.