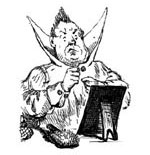 Come on, admit it. You haven’t read it, have you? Sure, it probably conjures images of the pointy teeth, blood-drenched lips, and high-collared shirts of many Hollywood portrayals. You know we’re talking about vampires here. Depending on your age, you might think of Salem’s Lot or Twilight, The Vampire Chronicles or The Vampire Diaries, Abraham Lincoln: Vampire Hunter or Buffy the Vampire Slayer — or perhaps The Lost Boys, Bloodsucking Fiends, Carpe Jugulum, Succubus Blues, Hotel Transylvania, Bitten & Smitten, or Real Vampires Have Curves.

Don’t be fooled. Bram Stoker is no Anne Rice. And Count Dracula is no Edward Cullen. Do yourself a favor and read the original. I say “original” not because Bram Stoker’s Dracula is the first novel of the perennially popular vampire genre. That distinction generally goes to the obscure Varney the Vampire by James Malcolm Rymer. I say “original” because Dracula was the novel that inspired the rest. I say “original” because there are so many trendy vampire stories out there these days — in print, on television, and at the movies. Although some are interesting, most of them are thoroughgoing trash. Bram Stoker’s 1896 novel is different. Dracula is a Victorian classic — a must read. It’s also one of the most compellingly Catholic-themed works of fiction written by a non-Catholic.

Forget your assumptions. Count Dracula is a classic evil antagonist. In a word, he’s demonic. He’s also old — very, very old. And surely you know this bit: Count Dracula sucks the blood of humans. “Blood is the life,” exclaims the clinically insane Renfield, who’s come under the Count’s spell in London. It is Dracula’s bloodlust that fosters his perpetual rebirth and leaves his victims undead, nocturnal, and zombie-like.

Since his homeland’s population in Transyl­vania is dwindling, so is his blood supply. Dracula, therefore, like any wise Eastern European of the day, decides to emigrate to London, Europe’s de facto capital at the end of the 19th century. And this is where the story really gets rolling. Dracula purchases a number of homes, located strategically around London so he’ll never be too far from his caskets of Transylvanian earth. (There’s a curious set of rules for vampires, and one requires Dracula to rest each day in Transylvanian soil, which he imported to England with him on a Russian ship, the crew of which all mysteriously died or disappeared en route.)

Achebe centers on the clash of civilizations between his native Ibo culture and Christian missionaries who established colonial government in Nigeria.

Flannery O'Connor & the Representation of Mystery

She believes a good fiction writer intuitively adopts a sacramental and liturgical view of creation and is therefore able to portray the spiritual in the ordinary.