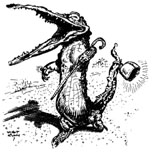 Down the Old Schism Trail

Over the last couple of decades there’s been much talk about “divisions” in the U.S. Catholic Church. The New Oxford Review, which had been Anglican, became Roman Catholic in 1983. Although we’ve given strong support to Pope John Paul II, we were not greatly interested in addressing those divisions in our early years as a Roman Catholic magazine. We were immensely relieved to be “home” with Rome; when one goes home, one doesn’t care to hear the bickering and quarreling among parents and siblings. Moreover, when one is home, one is so grateful to have found refuge that one doesn’t want to “cause trouble” — or, to put it another way, as new Catholics, we were reluctant to give stern lectures to veteran Catholics on how to conduct themselves.

But as time has passed, we’ve gradually realized that we’re not “new” Catholics anymore, and so the NOR has been paying increasing attention to the divisions in the household.

The divisions inside the U.S. Church have now come to a head in a document reported on and editorialized about in the June 30 National Catholic Reporter (NCR) and printed in full in the July 28 NCR. According to the June 30 issue, the document is endorsed by “approximately 40 U.S. bishops,” and NCR named nine of them, with Archbishop Rembert Weakland of Milwaukee being the first one named and the only archbishop named. In the July 14 NCR, Weakland wrote in to say that, actually, there were no signatories, but that “more than” 40 bishops “expressed their support.”

The document is highly significant, and for two reasons. First, while talk of divisions in the U.S. Church has often been sketchy or anecdotal, here we have 40-plus bishops who have joined together, and put their views in writing and made them public. While 40-plus bishops represent a distinct minority of the U.S. bishops, by coming together they have achieved critical mass.

Will the Coronavirus Lockdowns Usher in a Mustard-Seed Church?

The willful suppression of the sacraments by Catholic leaders could portend the diminution of the Church in both numbers and influence.

In his book review in the April NOR, Dale Vree asked rhetorically, “Who is God…