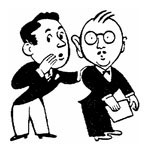 By Joseph Klee | May 2008
The Rev. Joseph Klee, who was ordained in 2001, is in residence at St. Mary of the Annunciation Church in Portsmouth, Ohio. He is chaplain for the Poor Clare Sisters of Perpetual Adoration of the St. Joseph Adoration Monastery in Portsmouth, and for the maximum-security Southern Ohio Correctional Facility and the Hispanic faith community in Scioto County.

While helping lead a bus trip to Washington, D.C., for the annual March for Life this January, I became all the more convinced of an unsettling phenomenon presently manifesting itself.

One of the more significant events marking the anniversary of the U.S. Supreme Court’s 1973 Roe v. Wade decision that legalized abortion in the U.S. is the glorious Vigil Mass for Life, offered the evening preceding the March at the Basilica of the National Shrine of the Immaculate Conception. This year the Vigil Mass for Life was celebrated by nearly 50 bishops, hundreds of priests, and an even greater number of deacons and seminarians — all imploring Heaven for an end to the Abortion Holocaust.

I’ve lost count of the number of times I’ve made the trip to Washington for the March, and am old enough to remember the very early days after Roe v. Wade was passed. What a totally different atmosphere existed in the Church then! A liturgical event like the Vigil Mass for Life in the early and mid-1970s would have been the epitome of political incorrectness in the Catholic Church. Rather, “mum’s the word” was the general attitude of the Catholic clergy toward the then-burgeoning slaughter of the innocents. The Evil One needed the conspiracy of silence on behalf of the nation’s priests and bishops in those difficult early years, as he was ensuring the enshrinement of abortion as the principal sacrament of the sexually decadent. Only a few “imprudent” elderly priests dared mention the a-word in homilies, and they were typically rewarded with banishment to the farthest corners of their respective dioceses for their subsequent priestly assignments. Dr. Bernard Nathanson, a leading pioneer in the abortion industry in the early years, when asked how abortion became legal in the U.S., cited the “silence of the bishops and the priests” as the cause.

Today, however, as even the most spiritually imperceptive members of society note the great number of schools being closed, the record number of immigrants filling the population void created by the decimation of a generation, and other indicators of de-population, speaking against abortion is all the rage in ecclesiastical circles. Unfortunately, the last horse long ago escaped from the barn, and a concerted effort by many of the nation’s bishops to close the barn doors is really no more than an exercise of “too little, too late.” Surely, the graces called down from Heaven by the incense-suffused Vigil Mass for Life are tremendous, but meanwhile the diabolical entrenchment of baby-killing in American society is so deep that one wonders how it could ever be extricated.

Letter to the Editor: November 1989

Timely, Factual... A Jewish View... Nose Against the Windowpane

The Intellectual Battle over the Puritan Legacy

The founders of Massachusetts believed, Miller says, “that ultimately all the world would imitate New England.”

They quarrel in low tide mud

Over scraps of rotten food;