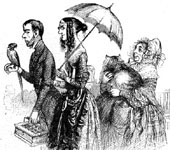 By Allen S. Maller | February 2003
Allen S. Maller has been rabbi of Temple Akiba in Culver City, California, for 35 years. He and his wife of 36 years have two children.

Most Americans are concerned that the divorce rate is at a little over 40 percent. Some are already resigned to high divorce rates as a side effect of individual freedom that we can’t do anything about. Yet study after study shows that the divorce rate of people with no religious identity is over 50 percent while the divorce rate of people who are very religious is a bit over 20 percent. Although our increasingly secular society still believes that love overcomes all obstacles, the evidence is clear for those who are willing to look at it that religion is at least as important as love in maintaining marital happiness.

We need to admit that love is a powerful but not very stable emotion. Couples who “live together” break up faster and in higher proportion than married couples. Many of the couples I marry have lived with, and broken up with, two or three people before they enter into their “first” marriage. Although the entertainment industry fervently advocates the idea that love is the answer to every problem, young people in the trenches are increasingly skeptical. One of the best ways to identify the importance of religion in stabilizing and supporting a loving marriage is to focus on the problems that arise when people in love marry someone of another religion.

Mixed religion marriages have a high divorce rate (between 50 and 60 percent, depending on religious affiliation). Disagreement over raising children is the number one issue. If a couple is of mixed religious background, should a priest, rabbi, or minister insist that they reach a clear understanding on the issue of their children’s religious identity prior to marriage? Should religious educators try to influence teens and pre-teens to avoid dating people of a different religion because there are so many extra difficulties involved that the chance of divorce is substantially higher? Many people find it hard to be critical of a loving couple. A young couple in love does not want to hear of potential difficulties in their relationship, and thus many priests, rabbis, and ministers keep quiet, for fear of being seen as negative. Yet, we have a duty to inform people of the facts of married life and urge them to do something about the issues in a mixed marriage, even if it is late in the game.

Of course, the best time to make people aware of these unnecessary difficulties is before they are “in love” — better yet, before they start dating. We have a duty to reduce the incidence of divorce if we can — an ounce of prevention is worth a pound of cure! The best time to educate against smoking is before kids start smoking. The best time to educate in favor of selective dating is before kids start dating. Love does not overcome all obstacles! A couple planning a mixed marriage should be challenged to face the facts. Young people should be informed of the difficulties before they get romantically involved.

What are the facts? It has long been known that Catholic/Protestant couples have an above average divorce rate. Even more so when Christians marry Jews, for the divorce rate more than doubles that of marriages between couples of the same faith. A study of over 3,000 non-Hispanic white, first-time marriages that occurred in the 1960s, 70s, and 80s reported in the August 1993 issue of Demography, found that the “first five year dissolution probabilities” increased by 55 percent for Jews who marry “out” and by 80 percent for Catholics who marry “out.” Similar increases were reported for both liberal and fundamentalist Protestants. Extra-high divorce rates for religiously mixed couples have been well known to sociologists and marriage counselors for several decades. However, several recent studies have found that unifying the family religiously (i.e., the conversion of one spouse to the other’s religious affiliation) reduces the extra-high divorce rate substantially for all religious groups.

Reviews of St. Francis of Assisi: Writings for a Gospel Life... Teresa of Avila: Mystical Writings... Francis de Sales: Finding God Wherever You Are... The Recovery of the Sacred: Reforming the Reformed Liturgy... The Diversity of Religions: A Christian Perspective...

Anti-Papal Catholicism & the Rise of Hitler

A review of Catholicism and the Roots of Nazism: Religious Identity and National Socialism