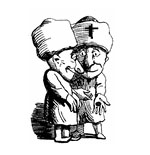 Anne Barbeau Gardiner, a Contributing Editor of the NOR, is Professor Emerita of English at John Jay College of the City University of New York. She has published on Dryden, Milton, and Swift, as well as on Catholics of the 17th century.

In 2003 Pope St. John Paul II said that Christians need an “objective” understanding of Islam so they know how to confront it (Ecclesia in Europa, no. 57). Sadly, as Fr. Édouard-Marie Gallez informs us, we are far from such objectivity. Instead we are given a surreal idea of Islam fabricated by Catholic theologians who firmly oppose any historical research on Islam. Fr. Gallez’s book Le malentendu islamo-chrétien (The Islamic-Christian Misunderstanding, available only in French) is a much-needed critique of the “dialogue” Rome has been conducting with Islam over the past half century.

Since the 1960s Catholic theologians have been dreaming that they only need to dialogue with Muslims to end our mutual misunderstandings. But 50 years of interreligious talks have proven fruitless. Whatever has been said between Catholic and Muslim representatives (the latter mostly Sufis or persons close to the gnostic side of Islam) has not filtered down to mainstream Muslims, and our own theologians have not told us even the minimum of truth about Islam. The published dialogues are no different from the politically correct books produced by most academics. Catholic dialoguers have denounced the least questioning of Islam as an attack on Muslims.

Rome has entered dialogue with Islam without reflecting on the mystery of history. Gallez says reason must be the servant of this mystery, but our theologians have been engaged in a game of abstractions. The Vatican’s Pontificio Instituto di Studi Arabi e Islamistica (PISAI) has blocked all scientific research in Islamology and Qur’anology. In secular universities too, the history and origins of Islam are taboo subjects, and scholars hesitate to inquire into them.

Fr. Gallez calls Islam “a tree without roots” and gives proof of the suppression of its history. In 1944, when the Scientific Academy of Bavaria was destroyed by U.S. bombs, 154 boxes of microfilms of ancient Qur’ans were believed to have gone up in flames. Not so. Orientalist Anton Spitaler had put them in safe storage elsewhere, but, since they might prove that the Qur’an had a long evolution, he never mentioned the survival of these boxes.

In 1990 Spitaler passed the microfilms to Angelika Neuwirth, a scholar linked to Islamic interests. She, in turn, did not admit their existence until Gerd Puin brought a few photos of fragments of ancient Qur’ans from San’a. When these photos began to be studied, the ancient fragments were found to have a washed-away text covered with a different text. Neuwirth set up a program called Corpus Coranicum to study these microfilms. However, she refused to publish them or let any scholars have access to them except those who, she knew, would reach conclusions favorable to Islam.

In 2007 Neuwirth asserted that the text of the Qur’an had been basically fixed at the death of Muhammad in A.D. 632. Yet Muslim sources themselves speak of Qur’ans being collected and eliminated even into the eighth century. Gallez says the account we have of Muhammad, Mecca, and the Qur’an was created by the caliphs of the eighth century. He notes that Mohammed Kalish, a researcher into the history of the Qur’an, has been threatened with death.

Catholic theologian Karl Rahner stated that non-Christians are “anonymous Christians” with an “implicit faith.” This “pseudo-reasoning” has led many Catholic theologians to believe in universal salvation. On the false presupposition that salvation must be offered during this life to everyone, they have concluded that Islam is a religion willed by God. Gallez counters that Christ’s descent into Hell, where He preached to souls in the underworld, demonstrates the depth of the mystery of death. There can be no salvation without an encounter with Jesus, a personal encounter with the Light, and this comes right after death as the decisive Act of Judgment.

Pope St. Paul VI, in Ecclesiam Suam (1964; nos. 100-113), put the various religions in concentric circles, with Catholics having 100 percent of the truth, other Christians 70 to 90 percent, Jews 50 percent, Muslims 30 percent, other believers 20 percent, and nonbelievers 10 percent. This theological construction had no foundation in history. It overlooked the reality that Christianity had spread across the globe from Nubia to China in the first century, impregnating virtually all cultures, and that post-Christian movements arising after the Apostolic Age had repudiated Christianity but appropriated some of its truths and values in order to supplant it. Are we to dialogue with real persons or with post-Christian ideologies? Progressives want the Church to dialogue with ideologies, to flatter systems that victimize people, and they dream of dialogue as an “instrument of salvation.”

Catholic theologians made the same mistake in the 20th century in their encounters with communists, dialoguing not with persons but with an ideology. They argued that communist systems were fundamentally good, refusing to mention the horrors communists were perpetrating. Fr. Gallez shows how both communism and Islam are post-Christian messianic systems that aim to construct an ideal society on earth and therefore collude with each other. Both envision history as having three parts: a dark Christian past, an enlightenment, and a utopian future. Both see determinism in history: Atheists say evolution pulls the strings of human marionettes while Muslims see Allah as doing it. Both exalt the use of force and demand blind submission.

Fr. Gallez explains how the ideas of Louis Massignon (1883-1962) have deeply influenced the dialogues Rome conducts with Islam. In his youth, Massignon was a homosexual whose lover, Luis de Cuadra, had converted to Islam. In Massignon’s mind, the link between Islam and homosexuality would remain, as seen in his essay “Prayer for Sodom” (1949).

Gallez makes the startling declaration that all Catholic Islamologists over the past 50 years have been followers of Massignon, who embraced a mysticism of suffering. In this he was encouraged by French writer J.K. Huysmans, who transmitted to him the doctrine of Joseph-Antoine Boullan (1824-1893), an excommunicated priest involved in Satanism. Boullan taught that a Christian could substitute his own soul for that of a sinner, according to “the law of solidarity in evil.” Massignon called this la badalya, or mystical substitution. His followers still use this term for their dialogue with Muslims today, as if Christians could offer their souls to God in place of the souls of Muslims. Gallez counters that at the core of every Satanist deviation is an attempt to take Christ’s place as redeemer.

Massignon experienced a mystical communion with Muslims in Iraq, believing he had transcended both Christianity and Islam. There he began to adulate Mansur Al-Hallaj, who was crucified in 922 and died saying, “I am Truth-God.” Charles de Foucauld corresponded with Massignon and tried to set him on a biblical path but could never quell his strange ardor for the Sufi gnostic sage Al-Hallaj.

The future Pope Paul VI was influenced by Massignon and institutionalized his ideas in PISAI, an organization that blocks all historical research into Islam. Even an intellectual like Jacques Jomier cites Massignon and asks why the “supernatural” should be reserved for Christian realities, thus implying that Islam is a revealed religion.

Massignon and his Catholic followers have also spread the myth that Arabs descended from Abraham, though this is not in the Bible; there the Ismaelites are said to live along the Euphrates, not in Arabia. The Arabs themselves never said they descended from Ismael until the seventh century. In fact, this idea first appeared in the Nazareen Book of Jubilees.

In the second half of Le malentendu islamo-chrétien, Fr. Gallez briefly relates the historical origin of Islam, something he recounted at length in his ground-breaking, two-volume, thousand-page work, Le Messie et son prophète: Aux origins de l’Islam (The Messiah and His Prophet: The Origins of Islam, 2006). Here he tells about the 19th-century Austro-Hungarian Jews who first began to study the Qur’an seriously. A couple of them saw that the Jewish Nazareens had contributed to the birth of Islam, but they didn’t notice the messianic project that linked them. Later on, scholars of Islam like Alfred-Louis Prémare and Patricia Crone discovered more pieces of the puzzle, which Gallez pulls together.

In the first quarter of the seventh century, Muhammad embraced the Jewish Nazareen doctrine and then preached it to Arab Christians, converting many of them to the Nazareen cause: a military takeover of Jerusalem as the first step to conquering the world. It is a myth that the Arabs were still polytheists in the seventh century and that Muhammad introduced them to monotheism. Rather, he preached to them against the Trinity and Judaized them. The Nazareens believed that as soon as they re-entered Jerusalem and had worshiped at the holy site, their warlike messiah (whom they believed had been taken alive from the cross and was ready to return) would arrive and lead them on a global jihad. But when they took Jerusalem in 638 and the messiah failed to return, the Arabs broke with their Jewish allies while continuing to believe that they were the chosen race destined to rule the world. The Qur’an was based on lectionaries in Arabic that the Nazareens had drawn from the Torah and the heretical Gospel of the Hebrews.

Later on, the caliphs would try to erase all traces of Islam’s Jewish origin and create a purely Arab past. There is no evidence, however, that Muhammad ever set foot in Mecca, a city Crone has shown did not exist before the caliphs raised it, long after Muhammad’s death. Traces of Islam’s Nazareen origin remain in the Qur’an.

Fr. Anthony Moussali, a Leb­anese priest, published his findings on the contradictory uses of the term nasara (Nazareens) in the Qur’an. He showed that at one point the nasara are friends and allies, while at another they are Christians and enemies. Catholic Islamologists received Moussali’s findings in silence.

In 735 St. John Damascene, who was familiar with the caliph of Damascus, learned that Muhammad had received the Qur’an in a dream. Thus, a century after Muhammad’s death, there was as yet no mention of Muhammad’s night journey to Heaven and the divine “uncreated” Qur’an seen in God’s hand. This shows how Islam had a lengthy evolution.

In the final chapter, Fr. Gallez suggests how we might dialogue with Muslims. We could discuss the Last Judgment and what God wants for the salvation of society and the world — a subject that reaches to the core of Islam’s heritage. In the Qur’an violence is a means to save the world, so dialogues on human rights are beside the point if they don’t address whether men are delegated to save the world. Another dialogue topic could be the Antichrist, since Muslims believe in the Antichrist — as can be seen in their many websites on him. We could also discuss if we are working against God when we try to establish His Kingdom on earth before the appointed day when the angels will arrive to separate the “sons of light” from the “sons of darkness.”

Fr. Gallez says Western theologians have failed to understand Islam for what it is: a post-Christian messianic enterprise for the salvation of the world. Instead, they have transformed it into another means of salvation and blocked all historical research that might interfere with their view. In 2011 Pope Benedict XVI urged us to see ourselves as “pilgrims” marching with Muslims toward the truth. Truth should be our priority from now on. To that end, Le malentendu islamo-chrétien is a book that deserves to be translated into English soon.

Evil spirits, often in a very subtle manner, have been far more clever and more destructive of sound spiritual thinking than generally supposed.

Barbarians Inside the Gates