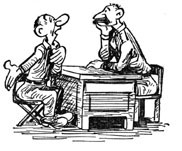 By Tom Bethell | April 2007
Tom Bethell is a Contributing Editor of the NOR and author of The Politically Incorrect Guide to Science (Regnery, 2005).

I tend to avoid interfaith dialogues. But I made an exception when I heard that Cardinal Scola was participating in what was billed as a “Distinguished Dialogue.” It would be held on January 17, at the John Paul II Cultural Center in Washington, D.C. Angelo Cardinal Scola, the Patriarch of Venice, would exchange views with Dr. Muzammil H. Siddiqi, the Director of the Islamic Society of Orange County, Calif., and the past President of the Islamic Society of America. (Venice, for some reason, has a patriarch rather than an archbishop.)

Their topic: “The Primordial Relationship between God and the Human Person in Catholicism and Islam.”

Was there not a certain inequality of rank? The Patriarch of Venice debating an Islamic leader from Orange County? It’s a pretty good rule of thumb that he who seeks a debate is the weaker party (“Can’t we talk?”). The other, in such cases, may have no good reason to accept (“It would be of no benefit to me”).

On the other hand, comparisons of weakness and strength are not easily made when contemporary Islam and Christianity are involved. Islam is a rising force in the world, while Christianity, in the West at least, seems to be in grave decline. Maybe the encounter would prove to be more evenly matched than the speakers’ titles suggested.

In Africa, every year six million Muslims convert to Christianity, and very few Christians convert to Islam. In Europe it's a different story.

The Persistence of Islam

Review of Letters on the Sufi Path by Ibn Abbad of Ronda, Eight Lives by Rajmohan Gandhi, and Lost in the Crowd by Jalal Al-e Ahmad

Retouching the Egregious Distortions of the Crusades

Review of God's War: A New History of the Crusades