Volume > Issue > A Man of Courage

A Man of Courage 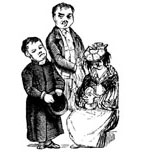 Patrick Rooney is the Director of Development for BOND, the Brotherhood Organization of A New Destiny, a nonprofit organization based in Los Angeles whose purpose is "Rebuilding the Family By Rebuilding the Man." He can be reached at patrick@bondinfo.org or (323) 782-1980.

What does it say about our current state of affairs that it takes a learned university professor to tell us what is commonly known in the most primitive of societies — namely, that there are significant differences between the sexes?

In Taking Sex Differences Seriously, University of Virginia professor Steven Rhoads lays down the facts about men and women. He has the studies, the research, and even the anecdotes to support his evident conclusions.

Whether it’s exploring differences in sexual desire and emotional attachment, detailing the horror of fatherless families, demonstrating men’s aggression and dominance, or dealing with the vast differences in men and women’s aptitudes for raising young children, Rhoads builds an airtight case that the differences are real, vast, and have consequences — major consequences.

Thirty-five years ago, the sexual revolution began in America. Many societal assumptions were challenged and ultimately discredited. The most important was the assumption that men and women are different.

Many women began to demand “equal treatment” — meaning the freedom to alter their sexual behavior to be just as promiscuous as many men are, ignoring the fact that most women don’t have the same sexual drive as men, and forge emotional attachments through sex much more readily than do men.

“Equal treatment” also meant equal pay and equal opportunities in the workplace. Practically speaking, it meant that in order to receive the equal pay and opportunities, women would have to perform equally to men. This can be difficult for a pregnant woman or a new mother, for instance. This is where feminist politics entered, and attempted to hide the effects of pregnancy and motherhood, so as to maintain the appearances of equal productivity of women in the workforce.

The sexual revolution has proven to be extremely injurious to America for a number of reasons: (1) The loss of innocence. (2) The emotional toll on women from multiple sexual experiences outside of marriage. (3) Rampant sexually transmitted diseases. (4) The some 40 million abortions in the U.S. since Roe v. Wade, the vast majority of them from recreational sexual dalliances.

Another tragic offshoot of the sexual revolution has been the millions of children born and raised without their fathers. Fatherlessness is out of control in America and is the number one cause of drug abuse, gang violence, and a host of other societal ills among young people.

A recurring point in Sex Differences is Rhoads’s mention of young women in his classes who affirmed feminism but whose subsequent behavior suggested they were traditionalists at heart. Along those lines, I’d like to relay my own anecdote: I’m the Director of Development for a nonprofit organization called BOND, the Brotherhood Organization of A New Destiny. Our purpose is “Rebuilding the Family By Rebuilding the Man.” When I started working for the organization and would mention our purpose to a woman who looked like the feminist type, I’d expect to hear some type of negative response, like, “You Neanderthal!” Funny, I’ve never once heard that type of reply. Yes, it is possible that some may have thought that to themselves, but it tends to confirm to me that deep down, most women understand that sex differences and roles are self-evident.

Rhoads does a great job of deconstructing Title IX and its insistence on an unnatural equality of the sexes in regard to sports accessibility in schools, even though the vast evidence shows that, numerically, men are much more interested in playing sports than are women. The book details heartbreaking stories of male students turned away from wrestling teams while their school desperately recruited a sufficient number of women for ladies’ crew teams and the like.

The one area of Sex Differences that I found somewhat confusing was the author’s support for “evolutionary” factors purported to contribute to these differences. For more clarity, I would replace the word “evolutionary” with “innate.” There are a number of male and female characteristics that are innate but which the author believes were more useful in an earlier, more primitive time. But a characteristic such as men’s more aggressive nature is, of course, also extremely useful in “bringing home the bacon” in the modern world, and is also highly useful in emergency and/or combat situations. In other words, I don’t believe these are “evolved” characteristics, but “innate” male characteristics available on an “as needed” basis.

Sex Differences is a great read. I enjoyed its rational and sensible explanation for common male and female behaviors, much of it due to hormonal differences, such as the comparative abundance of testosterone in men.

Sex Differences is a clear and compelling argument for a return to sanity vis-à-vis the ongoing battle of the sexes. Yes, men and women are different. This means that their roles are different: Men are essentially the protectors, the warriors. And women are the nurturers, the nest builders. This fact hasn’t changed for millennia, and it never will.

Society must stop forcing square pegs into round holes. We are harming our children and ourselves. As the book points out, many men are feeling the castration of playing Mr. Mom, and their wives secretly hate them for it. Sex Differences also points out that many women are choosing careers over raising their children, and suffering tremendously for it.

There is a spiritual element to this struggle. Rhoads writes at length about the civilizing influence of marriage on men. He also touches on the positive influence of churches that encourage men to properly lead their families and take responsibility for the children they sire.

These are physical manifestations of God’s order, for man is the head of woman (for example, 1 Cor. 11:1-6). This is not a male ego trip. It is the divine order, as laid out in the Bible, and followed by civilized societies for centuries. This is the primary reason the Bible has been attacked so viciously by feminists. Feminism sought to usurp the natural and God-directed authority of men. It has succeeded by selling the great lie that we — and our roles — are all the same. The movement’s success has brought about the chaos described in this book.

The war to regain a healthy, functioning society will be waged on many fronts. Certainly the churches must step up and advocate the divine and natural order. The media must be encouraged to stop promoting the current disorder, and its incessant attacks on men. The academic community too has a critically important role in delineating the profound differences between men and women. The current unisex vision is promoted in this venue to tomorrow’s leaders, citizens, fathers, and mothers. Therefore, I commend Prof. Rhoads’s insight, scholarship, and, most of all, his courage. For courage is the one attribute in shortest supply these days, and its lack is the cause of our current crisis.

Today, transgenderism is firmly established in the cultural landscape. Who will cut through the cant, expose the cultural masquerade, and proclaim the truth? Our religious leaders?

To the list of things Jesus could have been but wasn’t, there is now one more to add: A new movement would recast Our Lord as a transgender woman.