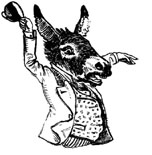 By Tom Bethell | July/August 2006
Tom Bethell is a Contributing Editor of the NOR and author of The Politically Incorrect Guide to Science (Regnery, 2005).

This past April, the Catholic University School of Law, in Washington, D.C., held a reception for the new Apostolic Nuncio to the U.S., Archbishop Pietro Sambi. My wife and I were able to attend. The Louise H. Keelty and James Keelty Jr. Atrium was the venue, and the new Nuncio was introduced by the Archbishop of Washington, Theodore Cardinal McCarrick.

Slim and slight of build, McCarrick (like Archbishop Sambi) was dressed in black clericals with a pectoral cross. And as is expected on these occasions, McCarrick said nothing memorable. He will soon be 76. He submitted his resignation last July, but stays on until the Pope accepts it. In mid-April, McCarrick told editors at the Washington Post: “I am getting the sense that this is going to happen soon.”

(Postscript: Indeed it did happen soon — within the month. Bishop Donald Wuerl of Pittsburgh, 65, will replace Cardinal McCarrick in June. In Washington, the rumors of Wuerl’s appointment were rife ahead of time, as they have been in recent years whenever a major see was about to open up. It’s worth noting that a well-oiled, anonymous PR machine has operated energetically on Wuerl’s behalf over the past decade. His appointment indicates that, when it comes to senior American bishops, it’s business as usual for the Vatican. Wuerl, who was secretary to John Cardinal Wright for ten years, is called a “moderate” and does not insist that prominent politicians who identify themselves as Catholic should set a good example in their public lives. He has been submissive in his dealings with the feminist nuns under his jurisdiction, and as bishop has shown little inclination toward leadership of any kind.)

Pietro Sambi was born in Italy in 1938, and before coming to Washington was papal Nuncio to Cyprus and Israel, and Apostolic Delegate to Jerusalem and Palestine. Before that, he was Nuncio to Burundi and then to Indonesia. He is a well-traveled man. His appointments have lasted for six or seven years each so it is reasonable to suppose that Washington will be his final post before retirement.

Some Questions for the American Bishops

Pewsitters I have met have questions in the categories of architecture, the priesthood, education, marriage & annulment, our dress-down Church, and more.