Volume > Issue > Away With the Manger, a Sleigh for His Bed? 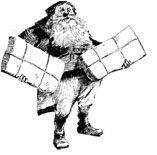 Away With the Manger, a Sleigh for His Bed?

Christmas is in the air. Merry merchants deck the halls of commerce. Children are singing carols. Old St. Nick is making his triumphant arrival on village squares, in urban centers, and at department stores. And cities and towns across the nation are preparing to defend themselves in federal court.

Yes, it’s that time of year again. When Salvation Army Santas ring bells and federal judges bang gavels. When localities try to acknowledge the religious roots of the holiday by erecting Christmas cribs. When the ACLU keeps watch by night over “the wall of separation” between Church and State.

Numerous American communities have labored mightily for the right to recognize their citizens’ beliefs by including religious elements in their holiday displays. The federal courts, applying their tortured interpretations of the First Amendment, have interjected themselves into these efforts, intent on eliminating any suggestion that Christ might have the central role in the holiday — the holy day — that bears His name. If Smallville should put up a crèche on Main Street or even a side street, the town may soon find a federal judge scrutinizing the ownership of the land on which the manger sits, the source of the funding to erect it, and whether the display is sufficiently “balanced” to render its religious element innocuous.

There are two standard ways of “balancing” so that the Christian content is rendered innocuous. One is to make sure that the Christian symbolism is flanked by other religious symbolism, the usual supplement being a Jewish Chanukah motif. (Did Mary have a menorah in the stable? Where did she get the oil for it — from one of the Ten Wise Virgins?) When the Muslim observance of Ramadan falls in December, even better: a monotheistic triple feature! (“O holy night, the crescent moon is shining….”) Add a dash of Kwanzaa to the mixture and — voila! — ecumenical goulash.

A scholar wrote to me that she fears for “the next generation of writers who grew up texting.” I think she's right, but only to a limited extent.

Letter to the Editor: July-August 2016

Who Are You Writing For?... Marketing Catholicism... 1641: Errata Corrected... Die, Papolators!... We Need You, But You Need to Grow Up... Murderous Barbarians Meet a Fragile Faith... More Meaningful Material... and more

Catholic minds left uninstructed by dissenting catechizers are offered sharp lessons by zealots such as Hunt.