Volume > Issue > Athanasius Against the World: Still Looking for Some Company 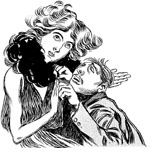 Athanasius Against the World: Still Looking for Some Company

The doctrine of Arianism, which questioned Christ’s divinity, appeared to be on its way to complete acceptance in the Church when the Council of Nicaea was held in A.D. 325. A fiery subdeacon named Athanasius came to the Council from Egypt and was an almost solitary voice against the teachings of Arius. After the Council and the adoption of the Nicene Creed, most of the bishops and leaders in the Church wavered due to intense theological, philosophical, and political pressure. Arianism was ascendant once more. There was only one thing in its way — Athanasius, who was now the Bishop of Alexandria, united with the Bishop of Rome. Confident in his belief that Christ was co-eternal with the Father, he refused to bend to the pressures brought against him by many of the bishops, and even the emperor. Finally, after years of exile, turmoil, and constant struggle, Athanasius won the day and the Nicene Creed was recognized as a truth of Christianity. In historical terms, he stood against the world and won.

In 1968 a lonely figure stood against the tide of conventional wisdom and emerging views on the nature of man and love. This figure represented a Church that has been vilified and scarred by his stance and yet still holds to her teachings. A few hardy souls have the guts to try to convince an unconvinced culture that we are making a big mistake, but nobody appears to be listening. Today, from within the homes of a small but committed group of families, comes an echo of the lone voice of Athanasius which speaks out on a subject so sensitive and misunderstood that, rather than being chastised, is largely ignored.

It is time to begin an honest conversation about a subject that speaks to our very notion of love and lust, selflessness and desire. People jealously want to control the one thing that demonstrates God’s infinite artistry and creativity — life. The subject is contraception, and I think it is time that those who stand alone like Athanasius should find company in the voice of married couples who have had the discussion and recognize the wonders of openness to love and life.

How far has marriage sunk? Married couples in 2005, as a proportion of U.S. households, "have finally slipped into a minority."

Advocating for the Innocent in an Abnormal World

A review of Abandoned: The Untold Story of the Abortion Wars