Volume > Issue > At the Close of the Year of St. Paul 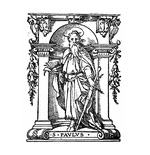 At the Close of the Year of St. Paul

By Peter A. Huff | June 2009
Peter A. Huff holds the T.L. James chair in religious studies at Centenary College of Louisiana. Active in ecumenical and interreligious affairs, he entered the Catholic Church in 1987.

The Year of St. Paul has rightly showcased one of the most extraordinary figures in the two-thousand-year history of our Christian faith — in fact, one of the most important men of all time. Special lectures, homilies, study courses, liturgical celebrations, media programs, and a flood of publications, including a new book by the Holy Father titled Saint Paul (available from Ignatius Press), have helped Christians around the world rediscover the splendor of St. Paul’s thought and the drama of his life. Arguably, interest in St. Paul — his remarkable experiences, his impressive achievements, his enormous contributions to the Christian tradition — has never been as high as it is right now.

During this year we have renewed this blessed and ancient admiration for Paul, hailing him once again as the model Christian convert, the first Christian writer, the original Christian intellectual, the prototype of the Christian apologist, the genius at the genesis of the Christian theological project, a leading member of the greatest generation of Christian martyrs, and the principal architect, save for Christ Himself, of Christianity’s distinctive worldview.

One feature of the “St. Paul phenomenon” that has not received its fair share of attention during this memorial year is the Apostle’s multifaceted approach to other religions — that is, his theological assessment of the proper stance of the Christian vis-à-vis traditions beyond the horizon of Judaism. Paul and the first Christians lived in a religiously vibrant world, charged with the social and psychological challenges of multiple sects and ideologies competing for acceptance in the same cultural environment, and often even in the same mind. Paul knew that rival myths and doctrines, “fables and endless genealogies” (1 Tim. 1:4), “foolish questions…and contentions and strivings” (Ti. 3:9), were not only preoccupying his readers but also threatening to overwhelm their imaginations. He also knew, all too well, that the hyper-religious climate of his era made him appear at times to be nothing more than a “babbler” (Acts 17:18).

The question of religious pluralism, of course, was not unique to Paul and his specific historical and cultural milieu. Christianity has always faced the intellectual and spiritual challenges of religious pluralism. Outwardly, confrontations with paganism, clashes with Islam, and, more recently, struggles with New Age and Protestant fundamentalism have forced the Church periodically to reinforce the essentials of her faith and rethink the meaning of her distinctive claims in a world teeming with religious alternatives. In recent years, Pope Benedict has stated on numerous occasions that religious pluralism and the philosophical-moral relativism that often accompanies it are two of the most critical issues of our time.

Fellini Back in Stride

An artist who apparently works very much from his feelings and intentions, Fellini turns his camera on people and lovingly watches their foibles and failures.

Our Church of Convenience

As a philosopher and ethicist, I have only once before written anything of direct interest…

Many believe the successful rescue of the Chilean miners was a feat of divine intervention, but rival churches are trying to take credit for the miracle.