Volume > Issue > Are You Sleeping? 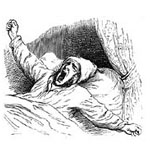 When a pope dies, he is pronounced dead by a physician, just as ordinary people are. But then an older tradition takes over. The papal chamberlain calls out the pope’s first name and asks, “Are you sleeping?” On getting no response, he taps the pope three times on the forehead with a small silver hammer. If this too evokes no response, the chamberlain announces to the world that the pope is indeed dead.

This custom might seem quaint, even somewhat silly, but it popped into my mind unexpectedly after I learned of the most recent terror attack in Western Europe by Muslim extremists. On July 26 two young men of Algerian descent slit the throat of an elderly French priest as he offered morning Mass in his picturesque church in Normandy. His two murderers forced him to kneel before they slaughtered him, after which they delivered a “sermon” in Arabic on the altar.

Really, what are all the recent terrorist attacks in Western Europe but taps on the forehead with a small — or perhaps not so small — hammer? Consider:

This is nowhere near a complete list. One must consult the Internet to have any hope of keeping up with the continuing litany of barbarism. Apart from adding to the count of the dead, injured, and traumatized, what has been the net result of these attacks? Zero. Nil. Rien. Nichts. Nada. Niente.

"Islam Has a Problem"

Bobby Jindal, the two-term governor of Louisiana, said in a highly publicized speech in London that "Islam has a problem." He continued, "religion that allows and endorses killing those who oppose it is not a religion at all," but "a terrorist movement."

Can We Please Have Some Compassion For People of Height?

A conference addressing the problems facing People of Height deserves attention and ought to draw a national audience.

Media pundits and cultural elites who routinely excoriate the Church with false charges are oddly silent when it comes to flagrant transgressions by Muslims against gays, women, and non-Muslims.