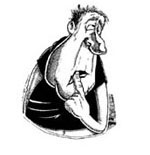 By Jason M. Morgan | January-February 2015
Jason M. Morgan is a Ph.D. candidate in Japanese legal history at the University of Wisconsin-Madison. He is currently in Japan on a yearlong Fulbright grant. His writing has been published in Japan Review, First Things' On the Square, The College Fix, Education About Asia, Modern Age, College Insurrection, and Human Life Review.

It should perhaps be elevated to the status of axiom that every bad philosophy confesses its own shortcomings plainly, and in spite of itself. What misguided adherents take as scintillatingly incisive truths, more detached observers write off as insipid bunk. One need look no further than liberalism for the quintessential example of this phenomenon in action. From Richard Rorty to Stanley Fish, few who take thinking seriously extend that same seriousness to the dogma of “do as you like.” Surely there is firmer stuff worth gnawing on than that.

What makes liberalism different from most other ideas, though, is that one needn’t have a library card in order to get to its heart. Even those who have never heard of John Rawls — and, mercifully, they are legion — are likely to have an encyclopedic knowledge of Hollywood movies, cable television shows, and Top 40 radio playlists. After all, liberalism is pop culture, and pop culture is liberalism. John Dewey flows out in a torrent from the amps of the tattooed crooners of our woe-befallen land.

There are few better examples of this phenomenon of the auto-confessing bad doctrine than Pharrell Williams’s breakaway pop hit, “Happy.” By any measure, “Happy” is a blockbuster. It has sold over 10 million copies, making it one of the best-selling singles of all time. The official music video has garnered, as of this writing, more than 535 million views on YouTube alone, with untold millions of additional views on parallel channels. Even bah-humbugging curmudgeons have been unable to escape the deluge; the caterwauling of a culture in freefall has reached into even the most battened-down enclaves of traditionalist holdouts.

Instead of merely dismissing the “Happy” phenomenon, let us turn annoyance into edification by trying to understand what all the fuss is about. What, exactly, is Mr. Williams trying to say?

For many reasons I do not often watch television. Don’t get me wrong: I used…