Volume > Issue > Another Outbreak of Mater, Si; Magistra, No 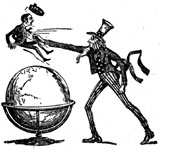 By Dale Vree | May 2006
Dale Vree is the Editor of New Oxford Review.

Mater, sí; Magístra, no means that she (the Church) is our Mother, but not our Teacher. Most Catholics make up their own minds about what they will or won’t accept in Church teachings — nowadays often called “pick-and-choose” Catholicism.

Regarding the statements by Pope John Paul II and Cardinal Ratzinger (now Pope Benedict XVI) that the war on Iraq is unjust, we’ve heard the same old “pick-and-choose” Catholicism from many of our readers who support the war. We’ve also heard persistently from some of our readers that those pronouncements are not infallible.

As for doctrine, the Church has her Just War doctrine. One of the criteria for a just war is that it be a “last resort.” Only four days before the U.S. invaded Iraq, Pope John Paul II (once again) appealed to the Just War doctrine of “last resort,” adding that “there is still time to negotiate.”

The Urgency of Timeless Questions

Review of At the Center of the Human Drama: The Philosophical Anthropology of Karol Wojtyla

From Guiding Lines to Institutional Reality

In the case of both the Latin Mass and the ordi­nariates, Pope Benedict's response was to revolutionize a policy put in place by his predecessor.