Volume > Issue > An Epic in Search of an Ending 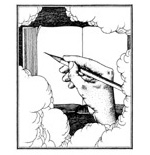 An Epic in Search of an Ending

By John Martin | April 2013
John Martin is a veteran professional writer whose career includes stints as a Charlotte Observer bureau chief, a Business Week copy editor, and chief speech­writer for New York State Comptroller Ned Regan. His published books include the novel A Leopard at Maytime (Doubleday), Roses, Fountains, and Gold: The Virgin Mary in History, Art, and Apparition (Ignatius Press), and the sportive The Cat on the Catamaran (Winged Lion Press). His poems and essays have appeared in Chronicles, The Remnant, First Things, The Sewanee Review, The Christian Century, and The Chesterton Review. His produced plays include A Chosen Vessel: An Evening With St. Paul, which has been performed more than four hundred times here and abroad; The Troll Palace and Macdeath, both mystery thrillers; and the St. Francis musical Troubadour, for which he wrote book and lyrics.

Ed. Note: In our November 2011 issue we published an article by Howard P. Kainz titled “On Fatima & the Private Interpretation of Private Revelation: Are the Last Four Popes a Bunch of Liars?” That article generated significant controversy, including a series of critical and even inflammatory letters (Jan.-Feb. 2012), as well as critiques in other publications. In this issue we revisit the topic of Fatima, and present two different perspectives on its interpretation and the disagreements it has engendered. First up is John Martin. A reply by Dr. Kainz follows. Letters in reply — even critical and inflam­matory ones — are, as usual, welcome.

Name it: the most important event of the twentieth century. World War II? The splitting of the atom? The moon landing? Sorry. Prodigious as they were, those events were trifles light as air when weighed against the event we call Fatima. Or have we forgotten? For as it happens, Fatima was not just the event of the century but an event matchless and timeless, a majestic witness testifying with elemental power about the will of Heaven and the future of earth. It spoke in the fire of the sun and in the gentle words of the Virgin Mary, and promised a surpassing mercy even as it provided a terrifying vision of souls tossed about in the flames of Hell. It set forth conditions for the world’s deliverance from an imminent darkness that would be shaped and spread by the Russian followers of Karl Marx. Finally, it assured us that if the Church met those conditions, there would come unimaginable miracles: a converted Russia, a period of peace, and a world in which the beauty of holiness would be honored in a magnificent new way in the person of Mary. And all this was not a fairy tale but truth — a dazzling revelation that both Rome and the dedicated faithful must yet come to fully appreciate, believe in, and live out if the epic event we call Fatima is to fulfill its glorious promise.

Make no mistake: Fatima is alive and at work and still speaking to Catholic hearts and minds with the bedrock force of Moses on Mount Gerizim: “I have set before you life and death, blessing and cursing. Choose therefore life, that both thou and thy seed may live” (Deut. 30:19). How, then, with grace abounding and a gift-wrapped new world ours for the asking, can we not hear, and hearing, how can we not respond? Perhaps the answer is that all too many of us view Fatima not as the comforter and deliverer it was meant to be, not as the divine imperative it clearly is, but as no more important in the scheme of things than a healthy economy, peace in the Middle East, or the latest U.N. resolution calling for greater kindness. And thus do souls miss the simple and beautiful message: Choose Fatima, and all these things shall be added unto you.

After all, as was said of an even greater event, “This thing was not done in a corner.” Fatima is cosmic, Catholic, apocalyptic, and a matter of public record — a reality that ceaselessly beckons the faithful even as it troubles the sleep of Rome. And what it keeps saying is that if the promised gifts are to be granted, more must be done by Heaven’s earthly subordinates. The priests in their pulpits must come to see that here is by far the greatest of all our present causes; the people in the pews must pray and sacrifice; the Holy Father must look the consecration of Russia in the face, call the bishops to the colors, and make that long leap of faith necessary for carrying out Heaven’s perfect will.

Meanwhile, if there’s comfort to be found, it’s to be found chiefly in the radiance of Fatima Past, with its everlasting signs and wonders and a pedigree reaching back more than five hundred years. Indeed, to gain a wider perspective on just how important both Fatima and Portugal are to the designs of Heaven, believers and doubters alike will find it instructive to look back to a poignant and prophetic time in Portuguese history — to the drama of those faith-anointed days when Fatima and its parent nation made their entry on the world stage.

Review of Celestial Secrets: The Hidden History of the Fatima Cover-Up

I went looking for Hell the other day. No, not the one supposedly down there —…