Volume > Issue > A Virus, a Crisis 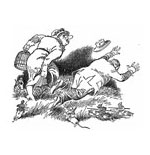 EXAMINING THE FALLOUT FROM ZIKAGATE

By Monica Migliorino Miller | April 2016
Monica Migliorino Miller, a Professor of Theology, earned a Doctorate in Theology from Marquette University. She is the Director of Citizens for a Pro-Life Society and the author of Abandoned: The Untold Story of the Abortion Wars (St. Benedict Press, 2012) and, more recently, The Authority of Women in the Catholic Church (Emmaus Road Publishing, 2015).

The headline in The New York Times said it all: “[Pope] Francis Says Contraception Can Be Used to Slow Zika” (Feb. 19). Who in the history of Christianity would have thought that we would ever see a headline claiming that a sitting Pope has contradicted Church teaching? So, what exactly did the Pope say? Here is an English transcript of Francis’s exchange with a Spanish reporter, in its entirety, provided by the Catholic News Agency (Feb. 18), that took place during the Pope’s hour-long press conference on his return flight from Ciudad Juarez, Mexico, to Rome:

Paloma García Ovejero: Holy Father, for several weeks there’s been a lot of concern in many Latin American countries but also in Europe regarding the Zika virus. The greatest risk would be for pregnant women [who are potentially at risk of delivering children with a defect of the brain called microcephaly]. There is anguish. Some authorities have proposed abortion, or else avoiding pregnancy. As regards avoiding pregnancy, on this issue, can the Church take into consideration the concept of “the lesser of two evils”?

Pope Francis: Abortion is not the lesser of two evils. It is a crime. It is to throw someone out in order to save another. That’s what the Mafia does. It is a crime, an absolute evil. On the “lesser evil,” avoiding pregnancy, we are speaking in terms of the conflict between the fifth and sixth commandment. Paul VI, a great man, in a difficult situation in Africa, permitted nuns to use contraceptives in cases of rape.
Don’t confuse the evil of avoiding pregnancy by itself, with abortion. Abortion is not a theological problem; it is a human problem; it is a medical problem. You kill one person to save another, in the best-case scenario. Or to live comfortably, no? It’s against the Hippocratic Oath doctors must take. It is an evil in and of itself, but it is not a religious evil in the beginning. No, it’s a human evil. Then obviously, as with every human evil, each killing is condemned.
On the other hand, avoiding pregnancy is not an absolute evil. In certain cases, as in this one, or in the one I mentioned of Bl. Paul VI, it was clear. I would also urge doctors to do their utmost to find vaccines against these two mosquitoes that carry this disease. This needs to be worked on.

Francis’s comments on abortion are arguably the strongest of any pontiff. He compared the killing of the unborn to, of all things, Mafia tactics (“to throw someone out in order to save another”), and he called abortion a “crime” and an “absolute evil.” His stance is clear and unequivocal.

Heretics and schismatics today do not leave the Church to form their own separate bodies. They stay inside the Church and demand their ideas be included.

A New Springtime for Liberal Catholicism?

When John Paul II and Benedict XVI commanded the chair of Peter, conservative and orthodox Catholics knew the pope and Magisterium were their 'court of last appeal.' That privilege now belongs to liberal Catholics.

Harold Cybulski was to be taken off life support. When his two-year-old grandson ran in, Cybulski opened his eyes, sat up, and reached for the boy.